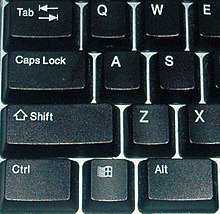 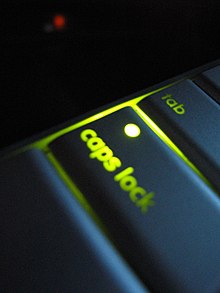 A Caps Lock ( english Caps Lock ) or switchover ( English Shift Lock ) is on a computer - or typewriters - keyboard directly above the left Shift ( English Shift ). They are used to permanently switch to an alternative assignment of the keyboard. For example, it helps when entering text in capital letters (see capitals ).

It can be labeled differently: Depending on the function, there are, for example, the standardized symbols ⇩ or η , a padlock symbol (not standardized) or the label Caps Lock . The imprint Shift Lock is practically no longer used.

On some (older) keyboards, the key is equipped with a special mechanism that provides tactile feedback that differs significantly from the other keys. The function of the toggle lock of a mechanical typewriter is imitated: the key remains in the depressed position after activation and only jumps back to the starting position after being pressed again. An example of such a keyboard is the Apple Extended Keyboard II , an ADB -compatible keyboard with key mechanics from the manufacturer ALPS . Often the button is also provided with a light source for status display in addition to or instead of the special mechanism .

The button can have two different functions:

On German computer keyboards, the key usually functions as a toggle lock, on Swiss or American keyboards as a caps lock key. Windows follows this convention and changes the function of the key according to the active keyboard layout. However, a “German (IBM) keyboard” (previously also called “German (EDV)”) keyboard assignment can be selected in the language settings. With this setting, the button causes the letters to be capitalized, but e.g. B. the numbers can still be reached normally. On macOS , the key works as caps lock by default.

The origin of the toggle lock lies in the mechanical typewriter keyboard: Pressing the key lowered the type carriage or raised the platen, whereby in contrast to the normal toggle key, the mechanism clicked into place in this position. In this position, the second assignment of the other keys was put on paper. Pressing the left shift key released the lock.

Modification of the caps lock key

In most operating systems (as of September 2019, however, not in all versions of Microsoft Windows without external additional software), the key can be deactivated in order to avoid accidental activation. In principle, there is also the option of assigning the key completely differently - e.g. B. as an escape key .