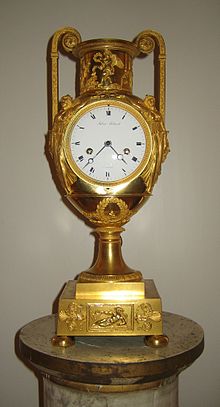 The gilding is performed since ancient times until the 19th century the most important and thus the oldest known metal plating technology. The first known mention is in the Naturalis historia (Natural History) by Pliny .

Many historical fire gildings, including those from antiquity, are still quite well preserved. Fire gilding therefore represents a very durable gilding. The incomparable soft and elegant shine of fire-gilded pieces is only achieved through the elaborate hand polishing with polishing stones, whereby microscopic unevenness of the metal surface is smoothed. Above all objects made of silver, copper, brass and bronze have been fire-gilded over the centuries. One of the most famous German, formerly fire-gilded statues is the " Golden Rider " in Dresden, which depicts August the Strong and was unveiled in 1736.

A gold amalgam is used for fire gilding .

The gold amalgam can be obtained in various ways. For example, about six times the amount of mercury can be added to molten fine gold . It is also possible to dissolve the gold in the form of gold dust, foil or gold leaf at low heat or simply by rubbing in an excess (six to eight times the amount) of mercury. The resulting amalgam alloy is a dough-like mass at room temperature and now melts well below the melting point of gold.

Now, the degreased to be gold metal surface and intertwined , that is: in Quick water submerged. To do this, a solution is made from mercury in dilute nitric acid . The amalgam can now be spread onto the goods prepared in this way (e.g. with a brass brush).

The amalgamated object is smoked over a faintly glowing charcoal fire while the amalgam is spread and smoothed. Traditionally, a hare's paw (the dried hind leg of a hare) was used for this. When heated, most of the mercury evaporates and the gold remains on the surface. By diffusing part of the gold into the base metal, the gold layer is firmly bonded to it. Because of its roughness, the surface is then not shiny gold, but matt yellow. With polishing stones ( agate or hematite ) the surface can be smoothed and made to shine.

Because the mercury vapors rising from fire gilding are extremely hazardous to health, the process has been largely replaced by galvanic gilding since the second half of the 19th century . Today there are again a few small businesses that use the latest environmental technology and comply with strict regulations for museums, churches and, increasingly, for the art and luxury market to restore using fire gilding and re-manufacture fine pieces.

Connoisseurs identify the type of gold plating based on its appearance: With the galvanic process, the gold layer is almost equally thick in all places, tending to be a little thicker at corners and edges. With fire gilding, the spread of the amalgam thickens the gold layer in the indentations. This leads to a characteristic difference in gloss, especially with fine ornaments.