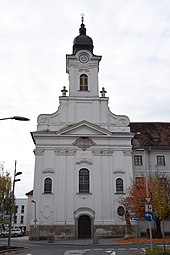 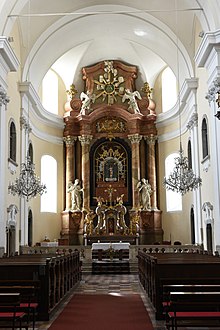 The high altar of the purification of the Virgin Mary (2018)

The Church of the Blessed Virgin Mary , a former Piarist Church , is a branch church in Gleisdorf in Styria.

An older hospital church was located at the location of the Church of the Blessed Virgin Mary.

The building that exists today was built from 1744 to 1747 under Cardinal Sigismund von Kollonitz according to the plans of the master builder Matthias Gerl under the direction of Josef Hueber , master builder in Graz, and was consecrated to the representation of the Lord (Mariä Candlemas, Mariäreinigung). The late baroque interior dates from the 18th century.

In the north is the former monastery wing, which was handed over to the Piarists in 1774 and closed in 1824 and housed the premises of the district court from 1850 until it was closed in 2014 (merged with the BG Weiz on July 1, 2014) . Both the church and the former Piarist monastery are under monument protection .

On the high altar, which is decorated with stucco marble, there is the Kollonitsch coat of arms and in its center a statue of the Virgin Mary from the old hospital church. In addition to a free-standing tabernacle, there is a double altar on each side of the central yoke with images of Saints John Nepomuk and the Mother of God, as well as Maria, Saint Anne and Saint José Calasanz , the founder of the Piarist Order. The pulpit was designed by Johann C. Schulz around 1770 .

The Marienkirche will be restored from 2011, and the exterior facade, which has been yellow since 1895, will get its original light gray color again.