This article explains the insect pubic louse . For further meanings of the term, see Filzlaus (disambiguation) .

The felt or Schamlaus ( Pthirus pubis , Syn. : Phthirus pubis ; vulgar Sackratte , Sacklaus ) is a human parasitic Tierlausart and one of the causative agent of pediculosis . It can still be seen with the naked eye and is transmitted through clothing , bed and bath towels or through close physical contact. Once removed from the body, pubic lice can only survive for up to 24 hours and their eggs even longer.

The pubic louse becomes about 1 to 1.5 millimeters long and is short but broad in shape with a gray body. The body has six paired, cone-like outgrowths. At the ends of its six legs there are strong holding claws with which it holds onto human hair. She also attaches her eggs, the nits , to her hair .

Depending on the different levels of sensory sensitivity and allergic sensitivity in humans, the bite of the pubic louse often causes severe itching and a blue discoloration of the skin area.

Pubic lice occur mainly in the pubic hair (groin area, depending on the intensity of the infestation also on the inner thighs), less often in the armpit and beard hair , very rarely in the eyelashes ( cilia ) of the upper and lower eyelids ( phthiriasis palpebrarum ) and even more rarely in the eyebrows. The infestation of the hairs on the eyes is mostly triggered by the poor hygienic conditions in crisis and war zones.

Pubic lice do not infect the scalp hair. The pubic louse is extremely specialized in humans and dies after 24 hours at the latest if it is removed from the body. Pubic lice infestation is called phthiriasis in medicine .

At the beginning of the 21st century, the spread of the pubic louse in western countries had decreased significantly. A British study found a significant decrease between 1997 and 2003. This development is largely attributed to the recently increasing use of armpit and pubic hair removal . Gynecologists and urologists in Sydney , Australia, reported that they had not observed pubic lice infestation in women since 2008, and the decline in men was 80 percent. 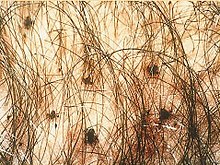 Lindane ( no longer approved in Germany ) and malathion ( withdrawn from the market in Germany and Switzerland) are used in the medicinal treatment of pubic lice infestation. Pyrethrum preparations are the second choice. Medical shampoo against head lice and pubic lice is available in stock and without a prescription in every pharmacy . These agents have an insecticidal effect . However, if the eyebrows or eyelashes are affected, they must not be used. In addition to the complete removal of all eyelashes including the lice and their eggs (nits), the use of various active ingredients or preparations such as fluorescein 20%, physostigmine 0.25%, petrolatum , yellow mercury oxide ointment 1% and pilocarpine 4% is suitable .

An alternative or complementary therapy is to shave off pubic and armpit hair , but also the beard hair. In addition, the clothes and duvet covers should be washed at at least 60 degrees and - if possible - dried with hot water. Clothes that cannot be washed at such high temperatures should be stored separately in a tightly tied plastic bag or an airtight sack for 14 days. As a result, the pubic lice and offspring hatched from the nits are starved and die. The clothes can then be washed at lower temperatures. For the first three to four days, clothing that is worn tightly in the pubic area, such as underwear and pajamas, should be changed daily and treated separately as described above. In order to prevent re-infection due to a ping-pong effect , sexual contact with others and shared use of towels should be avoided during the treatment phase.

The pubic louse as a disease vector

In contrast to the head and clothes louse , which is occasionally noticed as a carrier of dangerous pathogens in times of emergency and crisis, the felt louse no longer plays a role in Central Europe.

The species was formally described by Carl von Linné in 1758 as the Pediculus pubis , after it had been known for centuries. In 1815 the English zoologist William Elford Leach established a new genus for the species. Due to a typo in the description, it was given the name Pthirus instead of the intended and etymologically correct form Phthirus . Leach tried to correct the mistake two years later, which resulted in two generic names in use for many decades, some of them until today. In addition, Leach also introduced the replacement name Phthirus inguinalis , which is synonymous with Pthirus pubis , for the pubic louse in the same work . The International Commission on Zoological Nomenclature declared the genus name Pthirus , which was first published, to be "available" in 1928 (Opinion 104). This makes it the valid name of the genus today. Phthirus Leach, 1817 is considered an unjustified emendation of it.

The genus Pthirus includes, in addition to the pubic louse, another species, Pthirus gorillae Ewing, 1927. The genus Pthirus is the only genus of the family Pthiridae that contains only these two species. The sister group of the Pthiridae is the family of the Pediculidae or human lice , the three species of which parasitize humans, chimpanzees (genus Pan ) and various New World monkeys . A research team led by David Reed of the University of Florida in Gainesville (Florida) compared to molecular biological studies (mutagenic analyzes ) lice from gorillas ( Pthirus gorillae ) and pubic lice of people ( Pthirus pubis ) and found out that both lice species common ancestors had and then developed independently of each other. According to the scientists, the pre-humans came into contact with the ancestors of pubic lice by hunting gorillas, eating dead gorillas or spending the night in the nests of great apes. The human pubic louse is most likely derived from a parasite of another primate species, while the head and dress lice of the genus Pediculus were already found in the hominine ancestors of humans. The genetic split between Pthirus pubis and its sister species Pthirus gorillae is estimated to be around three million years using the molecular clock method .