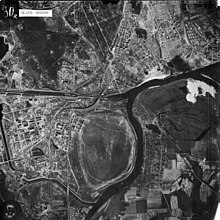 The airfield Tushino ( ICAO code UUUS ) is a former airfield in the district of Tushino from Moscow .

The airfield opened in 1935 and closed in 2014. In its place is now the Otkrytije Arena football stadium .

From 1934 to 1940, on August 18, “Soviet Air Fleet Day”, the airfield was the venue for the traditional air parade, where the latest types of Soviet aircraft were presented to the public. Only in 1936 was the date moved to a different day in August. After the five - year suspension of the event due to the war , it was held again from 1946, but from then on on alternating Sundays between June and August. In 1961 the last of 19 Tushino air parades took place. The event was then moved to the newly built Domodedovo Airport and has taken place every two years as MAKS at Moscow-Zhukovsky Airport since the collapse of the Soviet Union .

On July 5, 2003, two Chechen " black widows " were suicide bombed at a rock concert on the premises .