This article covers the French fortress of Fort Boyard ; for the television game show of the same name, see Fort Boyard (television series) . For the administrative seat of the French leased area of ​​Kwangtschouwan (1899 to 1943) see Fort Bayard . 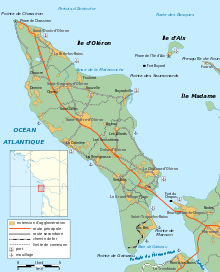 The Fort Boyard is a fort off the French Atlantic coast between the Ile d'Aix and the Ile d'Oleron in Charente-Maritime . The fort has an oval plan, it is 61 m long and 31 m wide. The walls rise to a height of 20 m.

The fort's task was to secure the strategically important naval arsenal of Rochefort , which had existed since 1666 , as the batteries stationed on the two neighboring islands with their limited range could not adequately protect the arsenal from English attacks. Vauban had already been commissioned with planning, but did not consider building a fortress on the Boyard sandbank to be feasible. It was not until Napoleon that work began in 1801. Due to strong currents and the tides , construction could only be carried out in summer and at low tide . In 1809 all work was stopped because the boulders that were transported to the sandbank as a foundation kept sagging due to their own weight. In 1837 the work was resumed on the occasion of renewed Franco-English tensions. The base was erected by 1848 and finally the superstructure by 1857.

The fort housed batteries that were operated by 250 soldiers. Since the range of the neighboring coastal batteries had meanwhile expanded, Fort Boyard was no longer of any military importance. During the Franco-German War , prisoners of war were housed here. It was used as a prison during the Paris Commune . In 1913 the fort was sold by the army. During the Second World War , it was used as a target for exercises by the German Air Force .

It has been owned by the Charente-Maritime department since 1989 .

Fort Boyard can be seen in the 1967 film The Adventurers with Alain Delon and Lino Ventura . The rumor is still going around that it could also be seen in the 1962 feature film Das Ruhekissen with Brigitte Bardot , which, however, could not be confirmed after closer inspection. In addition, it has been the location of the game show Fort Boyard, invented by the French Jacques Antoine , since 1990 .