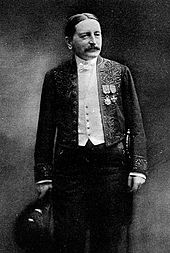 Thureau-Dangin in a photo around 1900.

Thureau-Dangin was chief curator at the Louvre from 1895 to 1928 and a leading expert on Babylonian cuneiform texts. After Jules Oppert used the term Sumerian as early as 1869 , there was no real evidence of the existence of a pre-Akkadian people in Mesopotamia , despite some evidence . The finds of bilingual texts in Nineveh and the finds from the excavations of Ernest de Sarzec and Léon Heuzey in Girsu , the residence of the ruler of the Sumerian state Lagaš , brought more and more evidence of a Sumerian language to light. 20 years after naming the language and culture as Sumerian , the term caught on. However, it was only with the publication of the Sumerian translations by Thureau-Dangin in 1907 in The Sumerian and Akkadian King's Inscriptions that the language became scientifically developed. He carried out excavations in Til Barsip and Arslan Taş . Together with Georges Dossin , Thureau-Dangin founded the Rencontres Assyriologiques Internationales , an association of ancient orientalists that often organizes international events. He was a member of the Académie des Inscriptions et Belles-Lettres and since 1938 a corresponding member of the British Academy .