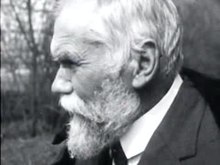 Frederik van Eeden was the son of Frederik Willem van Eeden and grew up in an environment where art and science played an important role. In 1878 he began to study medicine in Amsterdam . Van Eeden received his doctorate in 1886 and established himself as a family doctor in Bussum. However, he quickly specialized in psychotherapy . In the early 1880s, Van Eeden played an important role in Amsterdam student life and published his first articles. He became a member of the Dutch writers' association Flanor . In 1885 he founded the magazine De Nieuwe Gids with Frank van der Goes , Willem Kloos , Willem Paap and Albert Verwey , which was to become the mouthpiece of the Moving van Tachtig . The first editions of the Nieuwe Gids included parts of the fairy tale De Kleine Johannes written by Van Eeden . The fairy tale was published as a book in 1887. In 1894 Van Eeden left the editorial office of the Nieuwe Gids .

In 1900 Van Eeden's psychological novel Van de koele meren des doods was published . The work has been reprinted several times since then and is still widely read. In 1982 the novel was made into a film by Nouchka van Brakel .

The Walden Colony in Bussum was an attempt to give his social views a concrete form. The experiment, which lasted only a few years (1898-1907), was important for the development of Dutch socialism .

In lucid dream research , van Eeden was awarded the introduction of the term lucid dream .