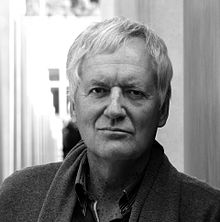 Fritz Stavenhagen (born May 15, 1945 in Klettwitz , Niederlausitz ) is a German actor , speaker and director .

Stavenhagen grew up as a half-orphan of the war in Minden / Westphalia, in 1963 he graduated from the Mindener Altsprachliches Gymnasium and then began studying German and theater studies in Hamburg, which he continued at the Free University of Berlin. There he decided to do practical theater training, attended a private drama school and passed the final exam in 1966. After a few theater stints, however, he resumed his studies in German and English at the Cologne University of Education in 1973, graduating with the first state examination in 1975 and then returning to the theater. He is the father of three sons. He is married and lives in Neuwied am Rhein.

In addition to the theater, microphone work determined his professional career from the start: In addition to his work as an advertising and voice actor, he was involved in a large number of radio and audio book productions, including a. with permission, Froschkönig , Bo im wilden Land and as a narrator in the children's musical series Ritter Rost , which was awarded the German Kids Award Gold and several Leopold prizes , and which celebrated its twentieth birthday in 2014 with a gala at the Deutsche Oper Berlin.

In addition to film and television roles, in 1971 he also appeared as a cabaret artist in Hurra, Wir Die by and with Georg Kreisler, and between 1984 and 1986 with his own solo program Alles under Control .

Further biographical information as well as audio and video evidence of the following tabular information can be found on Fritz Stavenhagen's website. See web links.

In 2001 he began to set up the Internet portal “Spoken German Poetry”, an audio anthology of German poems he had selected and spoken. After 19 years, this collection has grown to 1,350 poems by 110 authors and was accessed 4.9 million times in 2019. Also in 2019 he published his “Introduction to Poetry”, written for interested laypeople, the e-book version of which contains 97 links to different spoken poetry interpretations as well as further articles.

In 2010 Stavenhagen joined the movement for an unconditional basic income and joined the Bonn Initiative for a Basic Income (BIG). After founding the initiative as a non-profit organization, he was a member of the board from 2011 to 2013, the focus of his work was on public relations and press work in order to increase social acceptance of the unconditional basic income. In 2016/17, as press spokesman for the Rhineland-Palatinate regional association, he devoted himself to building the V-Party³ , which stands for a reorientation of society towards humanistic values, such as: B. the abolition of factory farming, an ecologically sustainable agricultural turnaround, species protection, an arms export stop, priority of the rail over the road, as well as for an unconditional basic income and a nationwide referendum . Resigned from the party at the end of 2017, he continues to campaign for the goals mentioned, even without a party.