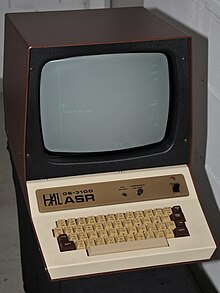 Radio teletype (Radio telex, English radio teletype, RTTY ) is a digital mode in which the communication between teleprinters via radio, ie via radio telegraph is performed.

As with wired telex, the characters are usually transmitted as an asynchronous serial bit stream according to the Baudot code . Typical data transmission rates are between a few tens and a few 1000 bauds depending on the available bandwidth .

If the transmitter is not to be switched off during a transmission pause, either a text loop with RYRY is sent, or the non-printing character to switch from the numeric to the text level. The transmission thus remains recognizable as an RTTY signal.

The first German equipment, in addition to the Hellschreiber were used for radio telex, which includes Lorenz key accessory SZ40 and Siemens & Halske- secret Telegraph T52 , British code name in the Second World War Tunny ( "tuna") and Sturgeon ( "Sturgeon"). Both radio teleprinters worked according to the Baudot method.

Although more efficient digital modes of operation than radio telex with regard to transmission security, speed, spectrum utilization or flexibility already exist today, it is still used for some radio services because, for historical reasons, there are large investments on the receiver side that require this mode of operation. For example, the sea weather report from the German Meteorological Service is sent out as a radio telex.

Radio telex is also used as an operating mode in amateur radio , there usually with 45.45 baud, more rarely with 110 or 300 baud. The standard modem for connecting a telex machine with its 40 mA line current signal to an amateur radio device was a construction manual according to Hans-Joachim Pietsch DJ6HP, which was recreated by many radio amateurs at home. There were also commercial solutions, one of which is the Minix MSK-10D.

In the 1970s and 1980s in particular, many mechanical teletyping machines became free due to the changeover to newer machines, but since the telex service was discontinued in 2007, this type of transmission has hardly been used commercially there either. In the meantime, amateur RTTY has been supplemented by more modern processes such as PACTOR , PSK31 and MFSK , but still not replaced.

In the professional sector (military, embassy radio, etc.), more advanced and faster processes are used, all of which are based on software.