George Reber Wieland (* 1865 in Boalsburg , Pennsylvania , † 1953 ) was an American paleontologist and paleobotanist . Its official botanical author's abbreviation is " Wieland ". 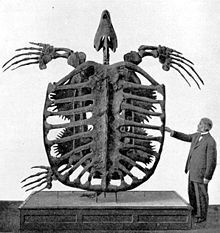 Wieland with Archelon in the Peabody Museum, 1903

Wieland studied at Pennsylvania State College , the University of Göttingen and the University of Pennsylvania . In 1890 he received his doctorate from Yale University . At Yale he first collected vertebrate fossils in the Black Hills of South Dakota for Othniel Charles Marsh . There the botanist Lester Ward had also found a petrified forest of Cycadeoidaceae in 1893 and through his influence he turned to paleobotany and expanded the large collection of this fossil plant group in Yale. Wieland became a specialist in fossil Cycadeoidaceae and remained at Yale at the Peabody Museum as a research associate until the 1940s.

He wrote a standard work on fossil Cycadeoidaceae (and its reconstructions have been included in many paleobotany books) and also dealt with the Jurassic flora of Oxaca in Mexico (especially Glossopteris , which differ from the rest of the Glossopteris flora of Gondwana ).