Archelon is an extinct genus of the sea ​​turtle relatives (Chelonioidea) from the Upper Cretaceous of North America. Fossils of this turtle date from the Campanian era, about 72 million years ago . Thegenus knownonly through the archelon ischyros type is the largest turtle discovered to date; the largest known tortoise (Testudinidae) is Testudo atlas from the Pleistocene of India . 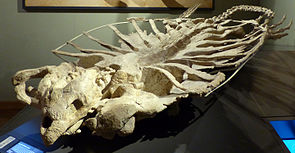 Archelon reached a length of up to 4.5 meters, the tips of the spread out front paddles were up to 4 meters apart. The bone armor shows a strong tendency towards the regression of the skin bone plates. The back armor (carapace) consisted only of transverse bone ligaments that emerged from the ribs. Probably the armor on the back was only covered by a thick leathery skin, similar to the leatherback turtles , the closest relatives living today, maybe it was also covered by horn plates (scuta).

Their enormous size provided an adult Archelon with adequate protection from their predators, so the bone part of the shell could be reduced, which made it easier to move in the water. The turtle had no teeth, so it is believed that it was omnivorous and ate soft animal foods such as jellyfish and plants. She lived in the shallow waters of the Western Interior Seaway , an epicontinental sea that covered most of interior North America during the Cretaceous Period.

Archelon belongs within the leatherback turtle relatives to the Protostegidae , an extinct family group ( taxon ) of marine turtles that are classified as a family in the classical biological system. In this group only the older Santanachelys gaffneyi from the Lower Cretaceous ( Albium ) is adequately documented by fossil finds and scientifically researched. 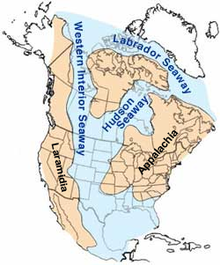 Some Archelon fossils were recovered from the deposits of the Western Interior Seaway in South Dakota (Montana Group, uppermost Pierre Formation ), Arkansas , Texas (both Taylor Group, Marlbrook Marl), Kansas and Nebraska . G. R. Wieland made the first find on the southern arm of the Cheyenne River , about 56 kilometers east of the Black Hills in South Dakota in 1895. In this area, the largest and most complete skeleton to date was discovered in the mid-1970s, which is now in the Natural History Museum in Vienna is on display. The two most recent finds from 1996 and 1998 also come from South Dakota, near the capital Pierre .