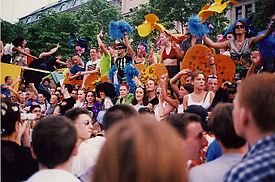 The Generation Move (short form: G-Move ) was a techno parade based on the Love Parade .

The first G-Move was celebrated in Hamburg on June 3, 1995. Around 30,000 people came together to attend the premiere of Hamburg's answer to the Love Parade. It led around the neighborhood and along the harbor. Well-known clubs from Hamburg took part in the parade with 11 trucks. Over the years the event got bigger and bigger and the route changed almost every year. The route from Heiligengeistfeld via Ost-West-Straße (today: Willy-Brandt-Straße) had been established for a number of years .

Until 2004, the G-Move always took place on Whitsunday Saturday and was accompanied by a lively Whitsun festival. After one of the two organizers, Nicole Hildebrandt, who came up with the name and idea, left, the format has changed. In 2004 the parade was not celebrated at Whitsun for the first time, on May 22, 2004. After criticism of the route through the Hafencity and a massive drop in visitors to around 15,000 visitors according to the Hamburger Morgenpost - instead of the expected 200,000 - the organizer Henry Seeberger announced a Aiming to move the G-Moves to Kiel . The reason for the planned move to Kiel were insurmountable official blockades from the Mitte district.

In 2005 there were other problems: First, the event was given to two new organizers, Björn Lau and Dirk Fröhlich. Due to numerous official requirements, the appointment in early summer could not be kept. Then there were plans for the implementation of the G-Move in September 2005. At the end of July, however, the organizers announced the final "end" for the "G-Move 2005".

In 2010 the well-announced follow-up parade "Move Reloaded" by the organizer Domenik Schoefeld was to take place in Kiel. However, the planning came to nothing after the organizer was no longer available to truck operators and they then canceled their participation in the parade.