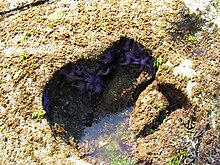 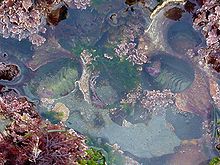 View into a tide pool near San Diego , California (USA), with seaweed and two beetle snails

Tidepools (CCT) and Rock Pools (RP) (so-called. Lithotelmen) make extreme habitats in the Eu to supralittoral (Surf to splash zone) of rocky coasts group. To own both Rock Pools is and tidal pools that they no permanent inflow from the free sea ( "Fresh water").

The tide pools, which lie in the lower to middle eulitoral, are usually regularly supplied with fresh water at high tide . The rock pools of the upper Eulitoral up to the border between the upper supralitoral and the terrestrial zone, on the other hand, only receive fresh water through spray water, spray water from the surf, in storm conditions or through precipitation.

The location of the rock pools and tide pools shows the difficult site conditions the animals and plants living in them are exposed to. While the inhabitants of the tidal pools z. If, for example, you have to fight against being driven out into the open sea by the current at high tide, it is important for residents of the rock pools to be prepared against progressive dehydration by sun and wind and the associated increase in salinity in the pool. The latter problem cannot be ruled out in the tide pools either. Even if the risk of complete drying out is not so great here, at least the temperature in the tide pool will increase significantly with prolonged exposure to the sun compared to that in the open sea.

The most important abiotic environmental influences for rock pools and tide pools are:

The latter point is dependent on the height of the pond or pool above the sea (HüM), as well as on its distance from the sea. Precipitation plays an important role, as the fresh water of the rain (Sal 0.5 ‰) can sweeten rock pools or tide pools. Due to its lower density, the fresh water is partly able to form a fairly uniform layer of lower salinity over the denser salt water .

In addition to the above Abiotic factors, biotic factors also have a strong influence on the environment in rock pools and tide pools. So increases z. B. the density of the plants living in it ( algae as well as autotrophic plankton ) through increased photosynthesis the oxygen content (O 2 ). At the same time, the pH value also increases , since O 2 is obtained through the breakdown of carbon dioxide (CO 2 ) dissolved in the water as carbonic acid (H 2 CO 3 ) , i.e. H. the water becomes less acidic. The heterotrophic creatures in tide pools and rock pools, on the other hand, lower the pH value through O 2 consumption and CO 2 production. The fluctuations in the pH value in the daily rhythm can, however, almost exclusively be explained by the rate of photosynthesis, which increases during the day with strong sunlight.

Since, as already said above, life in the rock pools and tidal pools harbors many dangers, the residents are dependent on special adaptation mechanisms. This often includes methods of protection against drought, e.g. B. after a tidal pool has dried out, there is no longer any contact with water. The Beadlet Anemone ( Actinia equina ) moves in such a case, its tentacles, taken a spherical shape and may be dry in this way for some time, much like the dwarf beach snail ( Littorina neritoides ), which uses its blood vessel-rich mantle cavity for breathing, and also closes its housing with an operculum . However, the inhabitants of the rock pools and tide pools must have certain fluctuations, v. a. with regard to salinity and temperature. Larvae and pupae of the mosquito species Aedes mariae have the greatest tolerance to fluctuations in salinity .