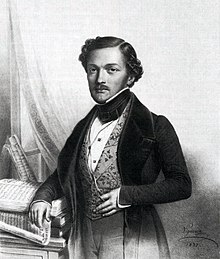 Duprez, the 13th of 22 children of a Parisian perfumery dealer, studied at Alexandre-Étienne Choron's Institution royale de musique classique et religieuse . In 1825 he made his debut at the Théâtre de l'Odéon as Almaviva in Gioachino Rossini's The Barber of Seville . After he had little success at Odéon and the Opéra-Comique , he went to Italy to perfect his singing technique. Here Gaetano Donizetti chose him for the role of Edgardo in the world premiere of his opera Lucia di Lammermoor in 1835 at the Teatro San Carlo in Naples.

From 1837 to 1847 he was first tenor at the Paris Opera . Here he sang a. a. the title role in the world premiere of Hector Berlioz ' Benvenuto Cellini and Fernando in Donizetti's La favorite . Duprez also performed in London and at German opera houses and taught at the Conservatoire de Paris from 1842 to 1850 .

The decline in his voice forced him to withdraw from the opera business, and in 1853 he founded his own singing school, from which singers such as his daughter Caroline Duprez , Marie Battu and Caroline Miolan-Carvalho emerged . Between 1826 and 1877, six of the nine operas composed by Duprez were premiered in Versailles, Brussels and Paris. In addition, Duprez wrote several music pedagogical and autobiographical writings.