Godziemba (also Godziąba, Godzięba) is a Polish coat of arms community that belongs to the Polish-Lithuanian nobility (see " List of coats of arms of the Szlachta ").

The estate was located near Poznan and included the small towns of Szamotuły , Gostyń and Buk . In addition, they probably also owned the areas around Inowrocław and Łomża .

As part of the Union of Horodło in 1413, the Godziemba coat of arms was extended to include nobles from the Grand Duchy of Lithuania. On this day the family's title was confirmed and the land around Poznan (Buk and Szamotuły) was handed over by the Polish King Władysław II Jagiełło . 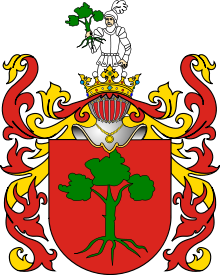 The coat of arms of the Godziemba community of crests

When Sieciech, the Wojowód of Kraków, invaded Moravia in 1094, he heard that the Moravians were staying not far away. During a surprise attack, his vanguard, which included Godziemba, fell into an ambush. After he was disarmed, he rode into a nearby forest, where his pursuers caught up with him. Godziemba jumped from his horse and pulled up a young spruce. He fought with her like a lance, and he succeeded in disarming and capturing his opponents. To commemorate this act, Godziemba was ennobled by the Polish King Władysław Herman . His coat of arms was named after him. In addition, his family probably got the lands of Gostyn, Lomza and Inowrocław.

On July 15, 1410, the battle of Tannenberg (Polish Bitwa pod Grunwaldem ) took place in what is now northwestern Poland . In this the Grand Master of the Crusader Order ( Ulrich von Jungingen ) and the Polish King ( Władysław II. Jagiełło ) faced each other with their armies. When he went to attack with his heavy cavalry, the crusaders tried to surround him and thus still win the battle. When the descendant of Godziemba saw this, he also tore up a pine tree, put it on like a lance and rode to the king's aid. In gratitude for his support, he was rewarded by the king on the same day with the lands around Buk and Szamotuly (which, like Gostyn, remained in their possession until the beginning of socialism in Poland).

As a reminder of these deeds, a tree is depicted in the coat of arms. The heraldry base color, red, symbolizes the bond with the Polish kingdom (the Piast coat of arms was used as a model). The crown on the helmet shows the position of the family, while the knight in white armor with the spruce in his right is supposed to remind of the battle.