Stockalperturm after renovation (photo from 2016)

Gondo ( German  Ruden ) is a parish of the Brig dean's office and a Swiss mountain village in the canton of Valais between the Simplon Pass and the border with Italy . Gondo belongs to the municipality of Zwischenbergen (officially also called Gondo-Zwischenbergen ). Ruden, the old German name of Gondo, comes from the Indo-European Rudaz and means " ore ".

The village lives mainly from the income from water , the through traffic and the trade in tobacco and gasoline. With the rebuilt Stockalperturm as a hotel and seminar center, the former gold mine and the numerous hiking trails, the village is a tourist destination . Gondo is a stage on the Via Stockalper .

Gondo, during construction after the landslide, recognizable by the blue shrouded Stockalper tower 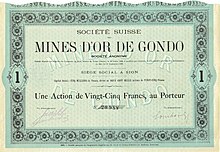 In Roman times was in the area around Gondo, in Zwischbergental after gold mined. The gold in the deposit is mixed with pyrite and silver and bound to quartz veins . Funded by Kaspar Stockalper , the Gondos gold mines flourished between 1660 and 1691. The mining rights changed several times over the centuries; In 1810 the Stockalper leased the mines to the Italian Maffiola family. With 15 workers they made good profits, but had to leave after a dispute with the owners, not without first filling up the shafts and tunnels. Finally, in 1894, the mines went to the Société Suisse des Mines d'Or de Gondo SA , founded by the French engineer M. Froment. With his announcement that he had found a new California, he was able to organize 5 million francs in capital and employ English specialists. In the corridors sloping steeply into the earth's interior, named Silzaly , Bruno , Fumée , Fontaine , Julie , Maffiola , Rona , Camozetta , Alcide , and Minna (ascending list), as well as Vinasque (another location), the workers toiled for a meager wage in 12-hour shifts, while the operators, expecting rich profits, enjoyed the luxury and comfort. It soon turned out, however, that the gold yield was not worthwhile. Only 72 gold vreneli could be minted from this gold, because the extracted 5800 tons of rock contained only 33 kg of gold (6 grams per ton). On May 17, 1897, the mines went bankrupt, interest extinguished and the mines fell into disrepair. Remnants of the walls can still be seen today. In 1916 the iron parts of the facilities were sold to Italy, where they were melted down for armament purposes during the First World War . In 1924, locals bought the land from the Mines d'Or de Gonde. Since then, cows have grazed on it again. An analysis from 1980 showed that, even according to today's assessment, the ores contain too little gold for industrial mining, even if a slightly higher proportion of gold could be extracted with today's technology.

On October 14, 2000, a third of the village was destroyed by a landslide that killed 13 people and tore down eight buildings, including the western part of the Stockalper Tower, built in 1650. As a result, Gondo was rebuilt and re-inaugurated on October 14, 2004.

Because of the low electricity prices in Gondo - there are two run-of-river power plants in the municipality - crypto-mining companies have been settling in Gondo since 2017 .