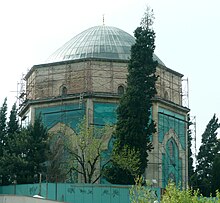 The Green Mausoleum , tomb of Sultan Mehmed I. 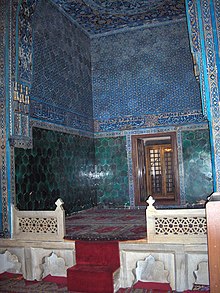 Interior shot of the Green Mosque

The Green Mosque ( Turkish Yeşil Cami ), pronounced [ jeʃil d͡ʒami ], is one of the three large mosques in Bursa (in Turkey ). It is considered a masterpiece of early Ottoman architecture and is the starting point for a series of mosques built in the Bursa style . It was built in the 15th century (on the mosque is given as the construction period 1412-1419, sources suggest 1414-1424) by the architect Pascha Haci İvaz on behalf of Sultan Mehmed I from stone and marble. The walls of the inverted T-shape building are covered with green tiles, which is what gave it its name. During restoration work in 1950, valuable ceiling paintings were also found. The decorations on the windows, portal and facades testify to the great skill of the stonemasons of this time.

Ottoman art has developed its own forms of expression in architecture, tile and vessel ceramics, textile art and book art . It set new quality standards in many areas.

The rulers' uninhibited / free thirst for representation, the enormous financial power of the empire, the sense of planning and precision as well as an inexhaustible reservoir of artistic ideas, which came from master builders, artists and craftsmen of Islamic and Christian origin, helped Ottoman art to flourish for a long time.

Ottoman architecture (the new architectural style) began in Bursa and Edirne. The former Byzantine settlements of Bursa and Edirne were chosen by the Ottomans as their first capitals, and the new rulers opened up interesting prospects for their building activities. At the beginning of the Ottoman architectural development was the traditional Seljuk-style pillar mosque , which stands out from the cityscape due to its simple size. Despite its impressive monumentality, the multi-dome mosque turned out to be a "discontinued model".

Murad I (1359-1389) founded a mosque with a central dome ( Hüdâvendigâr Mosque ) in Bursa, which had been named the capital since 1326 . The mosque was presented on the upper floor as a medrese (= Islamic university) and Koran school, a poor kitchen, a well house, and of course the grave of Murad I is located here. His son and successor Bayezid I (1389-1402) founded the Yildirim Mosque , which was already clearly different from his father's mosque.

The next foundation complex in Bursa goes back to Bayezid's son, Sultan Mehmed I (1413–1421). Yesil Camii ("the Green Mosque") , the most beautiful of the three large mosques, which is accompanied by a medrese , poor kitchen and the grave building of the donor, is based on the two-domed prayer room on the mosque of Bayezids I built 20 years earlier of the building decor and interior design ties in with Seljuk traditions. The green mosque was one of the highlights of early Ottoman architecture, although the construction was never fully completed due to the death of Mehmed I in 1421, which means that the obviously planned vestibule is missing.

It was built in the 15th century (1412-1419) by the architect Pascha Haci İvaz , on behalf of the sultan, from stone and marble. The walls of the building are clad with high quality faience. In addition, there was a valuable ceiling painting in the mosque, which was painted by the first mural painter of the Ottoman period, Ali Ibn Ilyas . The decorations on the windows, portal and facades testify to the great skill of the stonemasons of this time and were among the most beautiful examples of marble cladding. By omitting the eywan, a standardization of the public prayer hall was achieved, and the four corner rooms, which were used for secondary purposes, are also clearly separated. In the green mosque, a special room will be created above the entrance, where the ruler - similar to the Byzantine empress in Hagia Sophia - could pray in a well-protected place.

The tiled decoration of the interior consists of green and blue glazed hexagonal tiles , which gave the building its name “Green Mosque”, and it increases at the prayer niche and the sultan's box , where brightly colored star and tendril ornamentation accentuates accordingly. According to tradition, the faiences were made in İznik ( Nikäa ). While the faience mosaic was common in Anatolia at the time of the Seljuks , the technique of Cuerda seca was used here for the first time , in which the different glaze colors are applied next to each other and greasy barriers prevent them from running into each other during fire.

According to the signature, the masters came from the northwest Persian city ​​of Tabriz . They also created the tile cladding of the grave building, which was only completed after the death of Mehmed I, which, as a domed octagon with a height of 27 meters , achieves a monumentality previously unknown in Anatolia . The design and tiling should point the way for the future ruler's mausoleums in Istanbul.

A description of Sultan Mehmed I about the green mosque: “The structure of the sculptor of nature, the creation of the creator of the creature, I mean this noble sacred building is a copy of the Garden of Paradise , which was copied by the disposition of the Almighty and All-Knowing; and is one of the realms of the hereafter, which was woven with the splendor of this worldly life, which proudly walks in all directions and leaves the metropolises behind in confusion - God has not graced the ages with a similar work as long as the circling vault of heaven is turning ... "