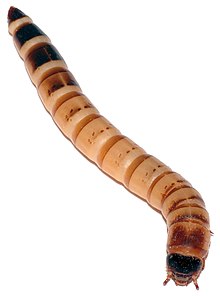 Larva of the black beetle

A clear naming according to biological standards is not easy, since different species names seem to represent one species . The species was determined according to KRAATZ (1880), whereby no difference was made whether it was Z. rugipes KIRSCH or Z. morio FABRICIUS. On the basis of more recent morphometric investigations and attempts at crossing, Z. rugipes and Z. atratus are morphologically distinct members of the same species (TSCHINKEL 1984). In addition, according to this author, Z. atratus and Z. morio represent the same species. For these reasons, the species must be named after the person who first described it and is Z. atratus , Fabricius 1776.

The beetles reach a length of 18 to 22 millimeters. Their cover wings have grown together at the wing cover seam , which is why the animals are unable to fly. They have pygidial glands that can give off a defensive secretion that is smelly for humans .

The natural range extends to Central America, Cuba and parts of South America. The larvae and imagines get there in and on organic waste and guano in front of fruit-eating bats. The oviposition takes place in the substrate, the larval development comprises 13–15 larval moults, with the subsequent stages of an inactive prepupa , pupa and imago . The entire ontogeny takes about nine months. It is known from field observations and laboratory studies that larvae only pupate under isolated conditions, whereas metamorphosis is inhibited in larvae occurring in communities. Instead, further larval moults follow until the larvae die, so that larval development under such conditions can include up to 20 moults (QUENNEDY et al. 1995, TSCHINKEL 1981, Tschinkel & WILSON 1971). The larvae cannot be sexed from outside. In the case of the pupae, the sex is very easy to determine, analogous to the meal beetle ( Tenebrio molitor ), since the developing genital organs in the rearmost abdominal segment are larger in male than in female (KONOK 1955).

Use as animal feed

The black beetle is professionally bred as a feed insect in many countries around the world and there - mainly in the larval stage - used as live food for pets . The larvae not only serve as fat and protein-rich food for many amphibians , reptiles , large arachnids and fish, they can also be used to supplement the food for small rodents in terms of protein intake. In this context, the scientific term Zophobas is used almost exclusively .

The larvae are also popular as bait for sport fishing for trout , chub or bream, for example .

Use as a food insect

Preparation of Zophobas larvae at a street food festival in Prague.

Like other species of black beetle in the larval stage ( mealworms , buffalo worms ), the larvae of the black beetle are used by humans as food insects . The larvae are marketed under the names Zophobas or Superworms .