OSB production - right before the press 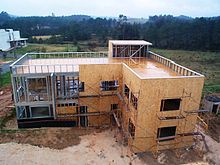 Coarse chipboard , also OSB boards (English for oriented strand board or oriented structural board , "plate from aligned chips") are wood-based materials that are made from long, slender chips (strands). The inventor was Armin Elmendorf in 1963. They were originally a waste product of the veneer and plywood industry.

Coarse chipboard is manufactured in industrial plants as follows.

Chip preparation
The chips (strands) are cut lengthways from the debarked round wood using rotating knives.
Drying
The natural moisture of the chips is reduced at high temperatures. This is necessary in order to be able to wet the chips with sufficient binding agent afterwards. In addition, there must not be too much moisture in the chips during the pressing process, as otherwise the resulting steam pressure could burst the raw panel.
Gluing
The binding agent is applied finely to the chips in a gluing machine .
scattering
The chips, which are about 100-200 mm long, 10-50 mm wide and 0.6-1.5 mm thick, are scattered lengthways and crossways using the throwing method so that they are arranged crosswise in three layers.
Press
The panels are mostly produced on continuous presses under high pressure and high temperature (press temperature 200–250 ° C).

For bonding are PF binder (USA), MUPF binder (melamine-urea-phenol-formaldehyde) and PMDI binder used, especially for reasons of quality, the proportion of PMDI predominates. PMDI is very often used in the middle layer and MUF or MUPF binders in the top layers. 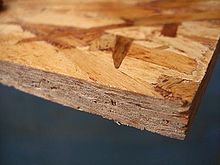 The bending strength is higher due to the long and slim chips than with normal flat pressed panels (chipboard). Due to the high proportion of adhesive, the OSB board has a comparatively high water vapor diffusion resistance μ of 200 (wet) or 300 (dry). The chip structure gives the OSB board its characteristic appearance, which makes it usable not only for "invisible" use, but also for decorative areas of application. In this regard, the effect of formaldehyde vapors on indoor air quality must be taken into account . The bulk density is about 600 to 700 kg / m³ depending on the intended use of the panels and is subject to production-related fluctuations.

Surface of an OSB board

OSB panels are used as building panels in the shell construction and in interior work as wall or roof paneling. In the floor area they serve as an installation plate (tongue and groove profile). However, special panels should be laid for installation above underfloor heating , because the risk of panel warping due to the panels drying out on one side is very high. In exposed floors, in loft extensions and as facades , they are used for decorative purposes due to their distinctive appearance, also in furniture construction for shelves and frames. In addition, they are used for packaging (boxes) and as formwork for concrete.

The 10 largest OSB production countries in each case

The EN 300 standard defines the following classes according to their mechanical properties and relative moisture resistance:

Another possibility to enable OSB panels to be used in the construction sector is to monitor them as part of a general building inspection approval from the German Institute for Building Technology (short form Z-9.1-XXX). The technical requirements for the panels are summarized in a manufacturer-specific approval document, which is the basis for further production monitoring.

In Germany, wood-based materials of emission class  E2 are not permitted.