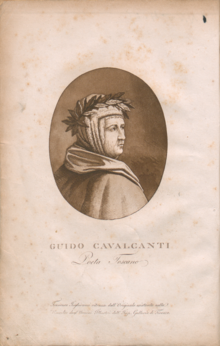 Guido Cavalcanti was born in Florence around 1255 to a rich family of merchants. His father Cavalcante de 'Cavalcanti - whom Dante portrays in his Inferno in the epicurean and heretics' Hell Penal District - belonged to the Guelph party and went into exile in Lucca after the victory of the Ghibellines in 1260. In 1266 the father returned to Florence and married his son Guido in 1267 to Beatrice from the Ghibelline family of the Farinata degli Uberti.

Guido Cavalcanti took an active part in the political disputes in Florence since the 1980s and, like his father, represented the interests of the Guelphs and their 'white' faction. In 1284 he was a member of the council of the municipality - together with Dino Compagni and Brunetto Latini - in 1294 he was temporarily banned from political activity, and in June 1300 he was removed from the priory, to which his friend Dante belonged, along with other leading representatives the whites and the blacks banished from Florence. In exile in Sarzana he fell ill, presumably of malaria, and when the sentence of exile was overturned in the same year, he returned to Florence seriously ill, where he died in August.

As a poet, Guido Cavalcanti, along with Dante, Dino Frescobaldi and Cino da Pistoia, is one of the main representatives of the Dolce stil novo style . Fifty-three poems by him (sonnets, canzons and ballads) have been preserved, which develop the courtly concept of love , which was adopted from the Occitan trobadord poem, into a doctrine of the fateful power of love, which Cavalcanti supports more than his colleagues, with natural philosophical and medical content a pessimistic attitude is emphasized in its pathological and destructive characteristics. His best-known work is the canzone Donna mi prega , which was already provided with a Latin commentary by Dino del Garbo and is still considered one of the most important documents for the Amordoctrine in the Italian Duecento .

With their sought-after linguistic and rhetorical difficulty, Cavalcanti's poems are expressly designed not to have a broad impact, but to be received by an elite of like-minded poets and scholars. His poetry had a lasting effect not only on Dante (who dedicated the Vita nova to him and praised him as the first among the "famosi trovatori") and other poets of his time, but also on Petrarch and Marsilio Ficino .

Cord Meijering set a poem by Cavalcanti ("Tu m'hai sì piena di dolor la mente ...") to music in 1997 as a duo for flute and clarinet.