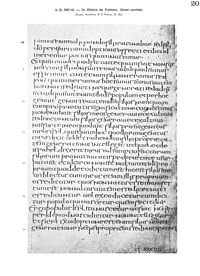 Page from the Hilarius Codex

The semi-uncial is an early medieval book font that was mainly used for patristic and legal texts. Historically it has nothing in common with the uncial . Identification letters are the minuscule -m, the N in the form of the capitalis , the italic d and the g (ʒ).

This early minuscule script was created by calligraphy of the younger Roman cursive (minuscule italics ) in the 5th century in Christian North Africa. However, the appearance is not yet characterized by ascenders and descenders as in the later minuscules. The earliest example that can be accurately dated is the Codex with the writings of Hilary of Poitiers ( BAV , Archivio S. Pietro D. 182), which was edited in Cagliari 509/510 by bishops who had been expelled from the Vandal Empire in North Africa. As a book font it was widespread from the 6th to the 8th century, in writing centers such as Tours ( Touronic semi-uncials ) or Fulda it was still used as a distinctive font in the 9th century. The font is one of the models for the development of the Carolingian minuscule .