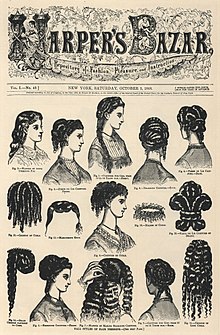 Harper's Bazaar is an international fashion magazine from the USA , which is currently represented in 29 countries with separate editions. Every month outstanding photographers, artists, designers and writers are invited to share their views on the world of fashion, beauty and pop culture. The magazine is published by the Hearst Corporation and has been regarded as the fiercest competitor to Vogue since the end of the 19th century .

The first edition of the magazine called Harper's Bazar at that time appeared in 1867 and was the first magazine of its kind. It was founded by the publishers Harper & Brothers (later HarperCollins ), who also published Harper's Magazine . Since then, the paper has developed into a refuge for exceptional talents. Fashion editors such as Carmel Snow , Alexei Brodowitsch , Diana Vreeland , Anna Wintour , Carrie Donovan , Millicent Fenwick and Liz Tilberis and renowned photographers such as Man Ray , Nickolas Muray , Louise Dahl-Wolfe , Richard Avedon , Inez van Lamsweerde , Diane Arbus and Patrick Demarchelier for the magazine. The editor-in-chief of the US edition has been Glenda Bailey since 2001.

In June 2006, Britney Spears posed naked with black hair and six months pregnant for the front cover and photo spread of the August 2006 US issue.

A German edition of Harper's Bazaar existed from 1985 to 1999. Since 2013 the magazine has been published again by Hubert Burda Media . The editor-in-chief of the new German edition was Margit J. Mayer until the end of 2014, and was replaced by Kerstin Schneider at the beginning of 2015. The sold circulation is 53,824 copies, a decrease of 32 percent since 2015.