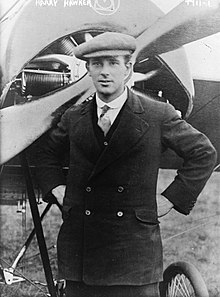 Harry George Hawker (born January 22, 1889 in Moorabbin Victoria , † July 12, 1921 Hendon Aerodrome near London ) was an Australian aviation pioneer . He was a pilot and co-founder of Hawker Aviation .

Hawker came to England in 1912 and decided to take part in the young aviation industry. He became a flight instructor and operated a few hangars in Brooklands ( Weybridge ) until he was Thomas Sopwith's chief test pilot . As such, he flew a Sopwith Tabloid in Australia in 1914 . The aircraft was damaged in the process. Hawker went back to England and flew the new Sopwith Probe planes during World War I.

After the war he started an Atlantic crossing with a Sopwith Atlantic , which ended almost tragically. He had to ditch and was fished up by a freighter. Despite everything, he won the Daily Mail prize over £ 5,000. In September 1920, the Sopwith company was liquidated to prevent additional tax claims. Hawker, Thomas Sopwith, Fred Sigist and Bill Eyre founded HG Hawker Engineering, which later became Hawker Siddeley.

Hawker died in a plane crash while on a training flight for an air show. The reason is suspected to be a fire on board and his handicap from a spinal disease ( Pott-Gibbus ).