The house sign kurz Gasse 2 was a listed house sign in the municipality of Plessa in the southern Brandenburg district of Elbe-Elster .

The three-dimensional picture is embedded in a wall between two windows of the property at Kurz Gasse 2 not far from the center of the village and the church in Plessa located here . 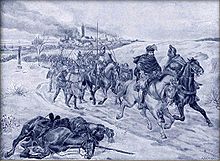 Contemporary depiction of the Hussite Wars by Hugo Schüllinger

The trapezoidal sculptural work is on a 40 cm wide and 27 cm high plate. It shows a fleeting horse with its head turned back and a naked woman tied to its back. The animal gallops through tall reed grass , which can also be interpreted as leaping flames . The work of art created by an unknown artist was probably created in the late 18th or early 19th century . Apparently it was walled in again and again during various renovations or new construction work on the property.

According to an essay by Adolf Bieß in the Bad Liebenwerda home calendar from 1960, the portrait is probably based on an orally transmitted family legend from the time of the Hussite Wars , which had survived orally for several centuries. In the region, the Hussitten trains had mainly hit the town of Ortrand in southern Schraden . According to tradition, this woman, probably a family member of the former owner of the property, was tied naked to a horse and driven into the burning bush at that time.

Another family member who worked as an art shaper at the Lauchhammerwerk is said to have created the work of art, which has been preserved to the present day, according to this legend. The truth of the legend is largely in the dark.