The Rostock Holy Spirit Hospital was a benevolent institution that existed in Rostock during the Middle Ages and the early modern period. Similar to other medieval hospitals , it was a residential and care facility for the needy on the one hand and an old people's home for the wealthy and childless on the other. A second Rostock hospital, the St. Georg Hospital , was located outside the city wall, as it also cared for lepers . The Rostock Hospital of the Holy Spirit was almost as old as the Hanseatic city itself and existed until the 18th century. 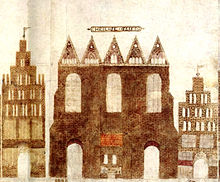 The hospital church on the Vicke-Schorler-Rolle, demolished in 1818

The Holy Spirit Hospital is documented for the first time in 1260. Its first location was in an unspecified location in the historic old town of Rostock , i.e. the area around the churches of St. Petri and St. Nikolai . After the original buildings were destroyed by fire in 1264, the hospital was relocated at the eastern end of Neustadt , between Eselföterstrasse and Fauler Grube . The funds required for this were obtained through trading in indulgences , among other things . On September 28, 1270, the Auxiliary Bishop Ludolf von Schladen from Schwerin gave indulgences for the granting of mild gifts to the Holy Spirit Hospital. After another fire in 1297, an extensive building complex was built that took up almost the entire area between Eselföterstrasse and Fauler Grube as well as Langer Strasse and Hopfenmarkt. The hospital became wealthy through gifts and legacies from wealthy Rostock citizens and acquired extensive land in the surrounding area, for example the villages of Groß Klein and Bramow .

In the northern section of the hospital there were two farmyards, which were bordered by small stalls. This area represents today's Heiliggeisthof . To the south of it was the infirmary .

The most striking building was the Hospital Church, which stood on the Hopfenmarkt (today Kröpeliner Straße ) at the corner of the Faule Grube. It was a five-aisled hall church , and the gable of each nave faced the hop market, so that a uniform gable front was created.

While the church fell into disrepair after the Reformation , the booths in the northern section were rebuilt during the 18th and 19th centuries. These buildings now flank the idyllic Heiliggeisthof . To the west of the hospital church was a late Gothic gabled house, which today houses the main building of the city library. It is uncertain whether it was part of the Holy Spirit Hospital.

The dilapidated hospital church was demolished in 1818. 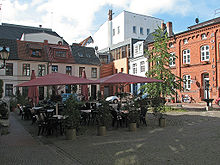 Following the Christian commandment to love one's neighbor, the Holy Spirit Hospital looked after people who were either destitute or who could not have been looked after by anyone else, i.e. the poor, the sick, the elderly and abandoned children. Impoverished strangers were also accepted into the hospital. Since needy and sick people could be seen everywhere on the streets in the Middle Ages, the need for charitable foundations was evident to everyone. That is why social institutions such as hospitals or monasteries were very often considered in the legacies of wealthy citizens.

On the other hand, the Heilig-Geist-Hospital also offered familyless people or childless married couples the opportunity to be cared for in the hospital when they are old or sick. This privilege, known as the prebende , was acquired through a generous donation to the hospital. The other way of gaining this privilege was to be a carer for years. Those who held these preambles - men and women - formed the Brotherhood of the Holy Spirit Hospital.