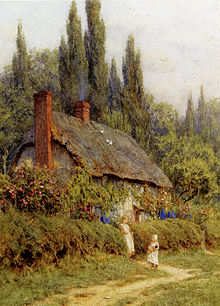 Children in front of thatched house in West Horsley, Surrey

The daughter of a doctor studied at the Female School of Art in London from 1867 and subsequently worked as an illustrator of children's books. She was friends with Kate Greenaway . In 1874 she married the much older Irish poet William Allingham .

Helen Allingham remained artistically active even after her marriage and turned to watercolor painting . She illustrated books like Six to Sixteen. A Story for Girls by Juliana Horatia Ewing (1876), Happy England (1903) and The Homes of Tennyson (1905). She provided woodcuts for magazines such as the weekly newspaper "The Graphic" or the literary magazine "Cornhill Magazine" .

Allingham was the first female full member of the Royal Watercolor Society . Her somewhat sweet rural idylls are still popular today, especially the romanticizing portrayals of poor cottages in Surrey and Sussex . The artist's memory is cherished by the Helen Allingham Society.