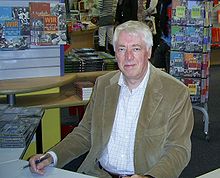 Helmut Rellergerd (born January 25, 1945 in Dahle near Altena ) is a German author. Under the pseudonym " Jason Dark " he brought the character ghost hunter John Sinclair into being and is one of the most widely read authors in his field.

Helmut Rellergerd grew up in Dortmund and wrote his first novel after finishing school and serving in the army. However, this first work was rejected by the publishers. The first Roman Rellergerds published by Bastei was In the Crossfire of the Death Dragon in the series Cliff Corner . After he had dealt with crime novels at the beginning of his writing career , he wrote the novel The Night of the Witcher in 1973 and created the fictional character John Sinclair in the further development . The adventures of the English hero are published by Bastei-Lübbe-Verlag in booklet and paperback form and developed into the most successful German horror series from the 1970s. Numerous novels have been translated into other languages. For his life's work, especially as the creator of John Sinclair , Rellergerd was awarded the Vincent Prize in 2018 .

Rellergerd invented the novel series Professor Zamorra and Damona King and wrote two novels as Dave Morris for the bat crime novels and was the author of the crime series Franco Solo . Under the pseudonym Red Geller he wrote the book series for young people, Das Schloß-Trio . Since 2006 he has been writing the series Don Harris Psycho-Cop under his well-known pseudonym, which is published by Blanvalet .

Rellergerd now lives in the Bergisch Gladbach district of Refrath .