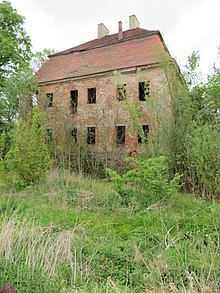 Ruins of the former Triebel Castle

The Triebel rule was a small aristocratic rule around the town of Triebel in eastern Lower Lusatia . The area is now in the Lebus Voivodeship in Poland and, to a small extent, in the southeastern state of Brandenburg in Germany .

The area around Triebel came to Duke Heinrich von Jauer after the Ascanians died out after 1319 .

Possibly in 1329, at the latest in 1345, the Lords of Hackeborn owned the Triebel estate, together with the Priebus estate . Since 1364 it was under Bohemian feudal rule. Before 1410 the rule went to Otto von Kittlitz, the former bailiff of Lower Lusatia. He sold it to Johann III in 1411. von Bieberstein , who has since ruled it together with the Sorau lordship .

In 1490 it came under Saxon sovereignty, and again under Bohemian sovereignty in 1521. In 1551, after the von Bieberstein family died out, the rulership of Sorau and Triebel fell to King Ferdinand I as a settled fiefdom. He sold it in 1557 to the Breslau bishop Balthasar von Promnitz , in whose family the rule remained. In 1735 it came under Saxon sovereignty again, and in 1765 the rule was sold to the Kingdom of Saxony . There she was incorporated into the Guben circle . In 1815 the area became part of the Kingdom of Prussia , where it had belonged to the Sorau district since 1816 .

1552 belonged to the Triebel rule

In the 18th century there were nine official villages and three vassal villages in addition to the city of Triebel.

The Triebel rule only existed for a few decades as a largely independent rule (under Silesian, then Bohemian fiefs). As gentlemen von Triebel were mentioned.

Since then it has been ruled together with the Sorau lordship.