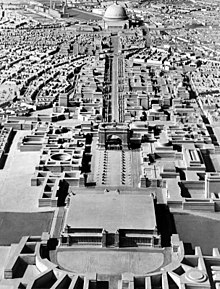 Model of the " world capital Germania "

As a rule of architecture is known buildings that (challenging) in ostentatious way political, military and religious power to express. This symbolic representation of power usually takes place through the particular height and size development of the building itself and its dominant location (e.g. on a hill, as the end point of a visual axis, etc.). Characteristic individual elements are monumental triumphal arch motifs , rows of columns in a colossal order , rusticated plinth floors or massive entablature zones.

Aristocratic architecture can be demonstrated in many epochs, from antiquity to the secular representative buildings of baroque absolutism (the Palace of Versailles was exemplary here ) as well as in various large churches ( St. Peter's Basilica in Rome, orthodox Alexander Nevsky cathedrals in the late 19th century, the Sacré Basilica -Cœur , Paris).

Well-known examples of rulership architecture are the large-scale buildings built or remained in the project of the dictatorships of the 20th century:

Due to its special symbolic character, which is often perceived as provocative, ruling architecture is particularly endangered immediately after the builders' wars and after political upheavals and is sometimes torn down. This is the fate of the Alexander Nevsky Cathedral in Warsaw, as well as the New Reich Chancellery and the Palace of the Republic in Berlin .