Hirschlanden is a district of Rosenberg in the Neckar-Odenwald district in Baden-Württemberg .

Hirschlanden was first mentioned in a document in 1100 in the Hirsauer Codex . As part of the community reform and the amalgamation of the communities of Rosenberg, Sindolsheim and Bronnacker, Hirschlanden lost its political independence on January 1, 1972. 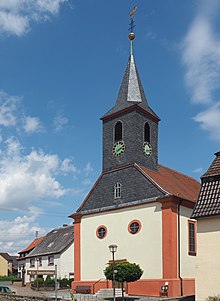 The parish was first in 1450 in Würzburg Diocesan matrikel mentioned. Nothing is known about their exact age and patronage , as the old church records were burned during the wars of the Reformation. The Reformation was introduced in Hirschlanden by Alfred von Rosenberg around 1558. After the old church in the area of ​​the lower Steige burned down, the current village church was built in 1717. The new rectory (opposite the new church) was built in 1850. Up until 1909 there were only people of Protestant faith in Hirschlanden. In the period that followed, the proportion of residents of Catholic denomination remained very low at around 2 percent. Hirschlanden is the seat of the Adelsheim-Boxberg church district of the Evangelical Church in Baden .

The former coat of arms of Hirschlanden has the following blazon: In a split shield above in silver on a four-fold red rock a striding red lion with a golden crown, below in blue a golden rose.

Hirschlanden is on the Frankenbahn (Stuttgart – Würzburg railway). The trains have been passing the station without stopping since the mid-1980s.

The A81 motorway (Würzburg-Weinsberg-Stuttgart-Singen) can be reached in a good 5 minutes via the L1095 and Berolzheim (Ahorn) .