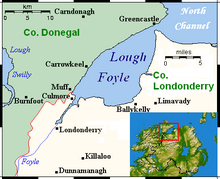 The site is west of the southern tip of Lough Foyle.

The from the Irish Iron Age Dating hoard of Broighter is a seven-part gold hoard of excellent quality, which in 1896 while plowing a stubble in Town Country Broighter ( Irish Brú Íochtair ) on the shores of Lough Foyle in County Londonderry in Northern Ireland was discovered. The find consists of utensils arranged one inside the other in the form of a boat model, two necklaces, a bowl and three torques , one of which is an artistically decorated puffer torque. 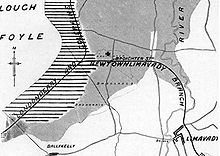 The most striking piece is the small boat, which has its closest spatial and temporal counterpart in the discovery of the gold boats from Torshøj in Denmark. It is unique in the Irish context and is the earliest representation of a sailing ship. The finely crafted boat is 18.4 cm long, 3.7 cm wide and weighs around 85 g. The ship model contains benches, oarlocks , two rows of nine oars and a rudder . This includes three forks, a yard and a spear .

The Puffer Torque is a masterpiece of the art of the Latène style . It consists of a hollow, tubular neck ring made of hammered gold sheet with connecting buffers that were attached with gold needles. A number of similar torques are known from the continent and date from the 1st century BC. However, the rich decoration of the neck ring and the insular style indicate that it was made locally, possibly by a skilled artisan with contacts in the UK and beyond. The motifs appear to depict stylized birds or horses, while Richard B. Warner (of the Ulster Museum) has suggested that some depict seahorses.

Importance of the hoard

The nautical nature of the hoard and its seafront location, in an area that was submerged in ancient times, has led to speculation that it might be an offering to a water deity, possibly Manannan mac Lir. In ancient legends, this ancient Irish sea god is associated with Lough Foyle, a cauldron, sailing ships and a magical horse capable of traveling over land and sea (after Waddle 1998).

Other artifacts from the hoard include a small bowl of chased gold and four neck rings. It is likely that this bowl represents a cauldron, an object that could have had both ritual and purely functional significance during the Iron Age. The two necklaces come from the Mediterranean region and date between the 1st century BC. The twisted torques, although likely of Irish origin, are related to 1st century neck rings found in Britain. Today Broighter's hoard is in the Irish National Museum in Dublin , and a true copy is on display in the Ulster Museum in Belfast , Northern Ireland .