The following important information is missing from this article:
Description of the 4 styles; Image examples; Order of the text
Help Wikipedia by researching and pasting it . 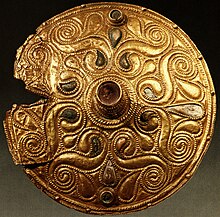 Celtic disc from Auvers-sur-Oise ( Val-d'Oise ), gold on bronze, early 4th century BC BC, today in the Cabinet des Médailles of the Bibliothèque Nationale , Paris

The Celtic art begins in the Iron Age , the so-called La Tene period (Lt). It is not a uniform phenomenon, but rather Celtic art shows strong spatial and temporal differences. While it was superseded by the Gallo-Roman period in continental Europe at the turn of the century, it persisted in parts of Britain and Ireland and influenced island art there.

The term "Celtic art" was coined by the English antiquarian John Mitchell Kemble . Influenced by the Brothers Grimm , he tried to pinpoint the difference between the Celts and Anglo-Saxons by means of archaeological finds . Above all, he identified a three-part fish - bubble pattern ( trumpet scroll ) as typically Celtic. His ideas were taken up by William Wilde in Dublin and Augustus Wollaston Franks in London. Franks identified the Wandsworth and Battersea shields and harness from a hoard find in the Polden Hills as Celtic, although ancient authors never referred to the inhabitants of the British Isles as Celts.

Paul Jacobsthal , a classical archaeologist from Marburg , developed the basic division of the Latène art, which is still valid today. However, one can see sharper regional differences today, while Jacobsthal saw a single Celtic art that was largely the same in all of Central Europe. Other important studies Latènekunst come from Otto-Herman Frey (Marburg).

The La Tène time is divided into the following periods according to the style development:

In his remarks on La Tène art, Paul Jacobsthal noted the rapid and sudden appearance of the La Tène forms, which differed significantly in their design from the previous geometric ornaments of Hallstatt art. He explained the Greek elements of the early phase through an indirect, time-delayed import via the Etruscan cultural area. The Greek forms were therefore not derived from elements that existed in Greece at the same time , but from forms that had already existed for some time and only gradually found their way into the inventory of forms of the Celtic craftsmen. This also explains the strong Etruscan influence at the beginning of La Tène art, which we can also capture through imports. The patterns can be found on pieces of jewelry (necklaces and bracelets, sword handles, fibulae) made of bronze, less often of gold. Inlays of coral, amber and red enamel create color effects.

Examples of the springtime style can be found in the graves of Somme-Bionne (France), Schwarzenbach and Reinheim (Saarland), Kleinaspergle (Baden-Württemberg), Bad Dürkheim (Rhineland-Palatinate) and the Dürrnberg in Austria. In addition, there are complicated geometric patterns, some of which were constructed with a pair of compasses (e.g. Hofheim, Hessen).

The four styles of Celtic art

Paul Jacobsthal defined different styles and tried to create a relative chronology . At the beginning of La Tène art he set the “Early Style”, which was to be followed by the “Waldalgesheim Style”, then the “Plastic Style” and the “Sword Style”. The latter two styles represented a continuation and development of the second style, which served as a fixed point in time in its chronology.

The early motifs of Celtic art are strongly influenced by Etruscan imported pieces, which in turn drew their forms and ideas from the Greek region. The intensive supraregional contacts of the Celts, especially with the Etruscan cultural area, are decisive. This basic set of shapes was used by the Celtic craftsmen as a basis for developing their own ornaments. These are purely decorative.

The Waldalgesheim style (after the Waldalgesheim prince's grave in the Hunsrück ) or tendril style is the first art style developed independently by the Celts. It is characterized by complex patterns of tendrils, interlocked spirals, loops and discs. Here, geometrically ordered plant patterns are particularly common. The tendrils and palmettes of the Mediterranean model were broken down into their individual components and individually juxtaposed or, in the case of the S-spirals, artfully intertwined. Often, the individual ornaments can hardly be distinguished from one another. Figurative representations are almost completely missing.

This style is characterized by a remarkable plasticity of the animals and people depicted. The mostly abstract patterns stand out very strongly from the background. Intertwined S-spirals and triskeles are typical.

This style was particularly common in Austria, Bohemia and Hungary. It was largely defined on the basis of ornaments on sword scabbards, from which the name of the style goes back.

In late La Tène art, the complex devouring of individual motifs largely disappears; we now find depictions of individual animals such as boars, deer, or cattle, which are largely absent in early La Tène art, as well as of horses and human heads.

In the late Iron Age there were also elements of the plastic style in Great Britain ( Battersea shield , Snettisham torques, etc.), but these show a typical insular character. In the Aylesford culture in southern England, S-spirals and vessel attachments in the form of masks are particularly typical.

Irish art during the imperial era drew numerous inspiration from Britain. The primers of the 4th – 7th centuries Century AD show simple geometric patterns, but also intertwined S-spirals and “trumpet scrolls”. The hanging basins follow Roman models, but with spiral patterns on the handle attachments. They were mostly found in Anglo-Saxon graves so it is not certain that they were actually made in the Irish settlement area.

Ireland in the early Middle Ages

The early medieval art of Ireland arose from a mixture of indigenous Iron Age, Roman, Germanic, Viking and Mediterranean influences. The intricate pattern of Germanic animal style , like him, were from the late Roman military belts, was known later by Anglo-Saxon artifacts associated with suggestions from the book illumination of the Middle East, the vine and emerged knot pattern , focusing on the ring brooches of the 7th-8th . Century.

The knot patterns of illustrated manuscripts of the 8th – 10th centuries Century are often referred to as typically Celtic. However, the style was widespread at that time and can also be found in metalworking and in stone carvings such as high crosses. The famous Book of Kells from the 8th century, for example, could also have been produced in Northumbria , in Eastern Scotland ( Picts ) or on Iona - and from there only reached Ireland in the 11th century.