In dog schools , dogs and dog owners learn, under expert guidance, how to deal with and communicate with one another and how to act as free of conflict as possible in their social environment. 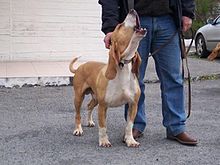 The dog should learn to carry out various commands as part of dog training . At the same time, the dog owner should learn to give these commands in a way that the dog can understand. This makes it possible to train even "difficult" dogs and to learn how to act correctly on such dogs, so that the dog and owner can continue to live together in "difficult" dog-owner constellations.

During a course in the dog school, the dog will also make contact with other dogs, which can have a positive effect on its social behavior.

There are schools that train on so-called dog parks; often - but not always - next will have the opportunity to in the wild or in different rooms each train .

In puppyhood the dog runs alongside the basic physical mainly of character development, so the imprint or socialization , from. The most important phase of dog training, because it sets the educational fundamentals, already takes place in the so-called puppy schools.

In the puppy course, the puppy owner should also be taught how to deal with the dog in a species-appropriate manner and how to implement positive puppy education and puppy characterization. The dog owner is given a basic knowledge of dog behavior, body language of the dog, biological learning behavior of the dog and species-appropriate structure of dog training. The puppy owner learns both the theory and the practical implementation with the puppy (puppy group). The puppy should learn to behave correctly towards other dogs and people ("social behavior"), and he will be introduced to various environmental stimuli that he will encounter in his later life (including different types of noise, people of all ages , Cyclists, joggers, the element of water, overcoming small obstacles, various visual stimuli). The playful learning of the basic concepts of dog training to become a family dog suitable for everyday use is practiced right from the start (for example, approaching when called, being on a leash, “sitting”, “down”).

In principle, the self-designation as a dog school or dog trainer is not subject to any official or legal requirements. Everyone can call themselves a dog trainer or dog school without further ado.

In the Federal Republic of Germany, since August 1, 2014, all persons who professionally train dogs for third parties or who want to instruct the dog to be trained by the animal owner must obtain approval from the local veterinary office ( Section 11 (1) No. 8f Animal Welfare Act ). The granting of this approval is linked , among other things, to proof of expertise .

In Schleswig-Holstein, the State Veterinary Association has been offering officially recognized certification for dog trainers since 2007, Lower Saxony followed in 2011. Theoretical expertise and practical work with dogs are tested.