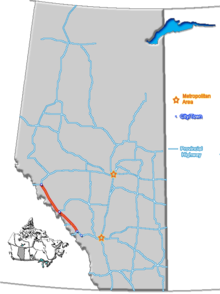 Map of the Icefields Parkway

The Icefields Parkway ( French Promenade des Glaciers ) is a 230 kilometer long section of Highway 93 . The Parkway is considered to be one of the most beautiful highways in the world and leads through the mountainous landscape of the Canadian Rockies between Lake Louise and Jasper . One of the main attractions along the route, which runs completely through parts of Banff and Jasper National Parks , is the Columbia Ice Field .

The Crowfoot Glacier is one of the numerous glaciers along the Icefields Parkway. The glacier got its name from the First Nation because it is shaped like a crow's foot.

The Bow Pass has an elevation of 2088 meters. Here the parkway reaches one of its highest points on the way through the two national parks.

Peyto Lake is located directly on the parkway and is striking because of its unusual color. However, the view is better than from the road after a short walk to the lookout point above the lake.

In Mistaya Canyon, the Mistaya River forces its way through a narrow and deep gorge.

This small settlement is the only way to purchase groceries and gasoline between the two endpoints of the parkway. The settlement originated in the time of the fur trade as there is a ford across the North Sasketchewan River. Today Highway 11 also begins at this settlement .

On Cirrus Mountain in Bridal Veil Falls, a stream fed by Huntington Glacier falls in four stages over a total of 370 meters.

Sunwapta Pass is about 108 kilometers south of Jasper. Here the Icefields Parkway overcomes a height of 2,030 meters. Although the name of the pass suggests otherwise, it is not located on the 3,317 meter high Sunwapta Peak , but on the 3,490 meter high Mount Athabasca . The pass also marks the transition from Banff National Park to Jasper National Park.

The Columbia Ice Field gives the parkway its name. However, it cannot be seen directly from the highway. The 325 km² ice field feeds several glaciers. One of these glaciers, the Athabasca Glacier, is particularly easy to see and can also be entered.

The Icefields Parkway is accompanied by water from the Columbia Icefield to Jasper. On this route the rivers, first the Sunwapta River and then the Athabasca River , have to overcome two large waterfalls. The Sunwapta Falls are the more southern of the two falls. Here the Sunwapta River falls 23 meters in two steps.

Athabasca Fall is the more northerly of the two large waterfalls on the Parkway. Here the wide Athabasca River squeezes through a narrow gorge to overcome a height of about 23 meters. Like the Sunwapta Fall, it is located directly on the highway and can be visited on well-developed hiking trails.

From the Icefields Parkway, a short hike takes you to the headland of this small lake.