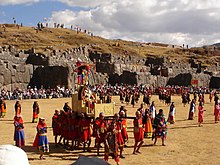 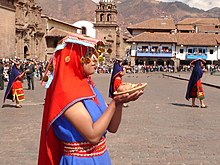 The Inti Raymi ( Quechua for "festival of the sun", inti "sun", raymi "festival") was a religious ceremony of the Incas in honor of the sun ( Inti ). It took place at the time of the winter solstice in the southern hemisphere, usually on June 21 in the Inca capital Cusco on the Waqaypata ("Place of Tears") and was at the same time the New Year festival in the Andean region . Since 1944, theatrical performances of the Inca Festival have taken place annually on June 24th on the Inca walls of Sacsayhuaman near Cusco, to which thousands of tourists and visitors from the area come.

Inca Garcilaso de la Vega reports that the Inti Raymi was the most important celebration in the Inca period . The ceremony is said to have symbolically reproduced the mythical origin of the Incas. The celebrations lasted nine days with colorful dances and processions. Prayers for good harvests were associated with animal sacrifices .

The last Inti Raymi took place in 1535 - after the conquest by the Spaniards - in the presence of Manco Cápac II . Subsequently, the Spaniards and the Roman Catholic Church banned the festival. Similar ceremonies took place in Peru in the following years, but were strictly forbidden in 1572 by the viceroy Francisco de Toledo .

Faustino Espinoza Navarro , longtime chairman of the Academia Mayor de la Lengua Quechua , and other indigenous artists and actors revived the 1944 festivities. The descriptions of Garcilaso de la Vega served as the basis.