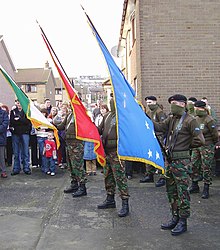 INLA volunteers parade in the Bogside Area in Derry

The Irish National Liberation Army ( German  Irish National Liberation Army , Irish Arm Fuascailte Náisiúnta na hÉireann ) was created on December 8, 1974 as a split from the Official IRA around Seamus Costello, who was shot in 1977 by a member of the Official IRA . The INLA members felt the Official IRA was not radical enough and rejected its ceasefire. The INLA sees itself as a Marxist-Leninist organization and fights for a united Ireland in the form of a socialist republic. The group was known for terrorist actions and violent internal confrontations; unlike the IRA , the INLA also carried out attacks in the Republic of Ireland , for example an attack on a NATO radar station in Cork . One of her most famous victims was Airey Neave , a close confidante of Margaret Thatcher , who was killed on March 30, 1979 in a bomb attack near the British House of Commons . One attack by the INLA, which was unanimously condemned by other Republican organizations, was the attack on the Droppin 'Well Bar near Derry , which was frequented by British soldiers, on December 6, 1982, in which 17 people were killed, including six civilians.

The cell structure of the INLA was nowhere near as rigid as that of the IRA; all too often it was a catchment basin for those who were not admitted to the IRA. It was accordingly easier for the British intelligence services to infiltrate the INLA. The ensuing arrests, the internal feuds and the death or resignation of almost all leading founding members between 1975 and 1981 brought the group to the brink of insignificance. At times there were two organizations called INLA, in addition a spin-off called the Irish People's Liberation Organization , or IPLO for short. The IPLO, which controlled drug trafficking in some Catholic working-class neighborhoods in Belfast in the early 1990s , was militarily crushed by the IRA in the summer of 1992. The current INLA membership is estimated to be less than 50. At the political level, the INLA approach is represented by the Irish Republican Socialist Party IRSP.

In August 1998 the INLA declared the armistice, six months earlier on December 27, 1997 the organization had succeeded in a spectacular attack in which members imprisoned in Maze Prison included the leader of the Loyalist Volunteer Force LVF Billy "King Rat" Wright, who was also imprisoned there shot.

Although the ceasefire had been in effect for more than a decade, the INLA only declared in October 2009 that it would permanently renounce violence. In February 2010 she surrendered her weapons under the supervision of the Independent International Commission on Decommissioning .