Watchtower of the Maze

The Maze Prison (official name: Her Majesty's Prison Maze ), also known as Long Kesh ( Irish An Cheis Fhada ) or H-Blocks (because of the plan), was from 1971 to 2000, a high-security prison near Lisburn in Northern Ireland .

To cope with the escalating unrest in Northern Ireland at the beginning of the 1970s, the British government resorted to controversial methods such as mass internment ( internment without trial ) . The arrested were initially held in barracks on the disused Long Kesh air base near Lisburn. This camp was set on fire by the approximately 800 republican inmates on the evening of October 15, 1974, and almost completely destroyed. They had agreed with the loyalist prisoners. The Republican prisoners gathered on the sports grounds of the army base, which was surrounded by thousands of soldiers. The next day around eleven o'clock they were bombarded with tear gas from helicopters and the Duke of Edinburgh regiment stormed the facility.

It was later turned into a regular prison , named after the nearby town of Maze. The provisional accommodations became highly secure prison structures, also known as H blocks . The name is derived from the eight H-shaped prison buildings newly built in the early 1970s, which from March 1971 housed prisoners who had been convicted of terrorist offenses.

Most of the inmates of the H-Blocks were members of Republican paramilitary groups, but loyalist groups such as the LVF, the UDA or the UVF were also represented and had their own command structures in the prison.

The H-Blocks became particularly well known through the hunger strike of members of the IRA and INLA in 1981. In order to regain the status of prisoner of war ( Special Category Status ), which the prisoners had been deprived of when they moved to the H-Blocks, began on 1 March 1981 Bobby Sands , Patsy O'Hara, and several other inmates in the H Blocks on hunger strike. Under the Special Category Status introduced in 1972, internees as well as those convicted of terrorist offenses had the same rights as prisoners of war in general, such as the right to wear their own clothes, no compulsory work, extended visiting rights and extended contact options among the prisoners.

The confrontation began in 1976 when increasing numbers of prisoners refused to wear prison clothing, which they believed would have accepted the status of ordinary criminals. As a result, the only clothing left to them was the prison blanket , from which the term blanket protest arose. Around 300 prisoners took part in this form of protest. After, according to the depiction of the prisoners, inmates were repeatedly mistreated by guards while emptying the toilet buckets, the Dirty Protest began in 1979 : the prisoners poured their excrement out of the windows. After the prison administration had the windows barricaded from the outside, they smeared their excrement on the cell walls, and the conditions in Maze prison became untenable.

Since the newly elected Thatcher government showed no concessions, the prisoners decided to intensify the protest with a hunger strike. Bobby Sands, the IRA commanding officer at Maze Prison, was the first to go on hunger strike, and another prisoner started every week. After 66 days without food, Sands, meanwhile elected to the House of Commons, died on May 5, 1981. Nine other members of the IRA and INLA died before the hunger strike on October 3, 1981 was ended. In the period that followed, practically all of the prisoners' demands were met, even if the name of the special category status was not reintroduced. The hunger strike attracted attention around the world and made the Northern Ireland conflict a global issue.

As a result of the peace process in Northern Ireland after the Good Friday Agreement , the prisoners in the Maze were gradually released. The prison was closed on September 29, 2000, and the future of the H-Blocks is still being negotiated. 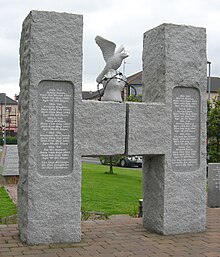 Memorial to the victims of the hunger strike in Derry

Members of terrorist groups, including members of Protestant organizations such as the UDA and Irish Catholics such as the Provisional IRA and INLA, were serving their sentences in the Maze Prison . Inmates were later housed separately according to denomination at their own request, with both sides then organizing their daily prison life in a strict and quasi-military manner. In particular, underground republican organizations insisted that their members imprisoned there were not criminals in prison, but had prisoner- of- war status .

This made the Maze prison a particular focus of political developments in Northern Ireland; only a few significant events are given here:

This agreement was a turning point for Maze Prison. Members of banned organizations who were involved in the formation of the treaty and who joined the armistice were thereby entitled to early release . As a result, the prison emptied and was closed on September 29, 2000.