Main building of the museum

The National Museum of Iceland ( iceland . Þjóðminjasafn Íslands , [ ˈθjouðmɪnjaˌsapn̥ ˈistlants ]) is a cultural and historical museum dealing with the history of Iceland . 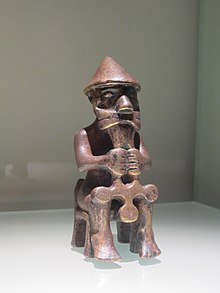 The museum was founded on February 24, 1863 as the " Museum of Antiques" ( Forngripasafnið ). Previously, historically significant Icelandic objects were usually brought to the National Museum of Denmark in Copenhagen . In 1911 the museum was given its current name. After Iceland's independence, some of the objects that were important for Iceland were transferred from the Danish National Museum to the Icelandic National Museum.

The first curator of the Icelandic National Museum was Jón Árnason , who was also a librarian at the National Library in Reykjavík . The collection was initially housed in the attic of various buildings: the cathedral , the former state prison (today's government building), the parliament building , the national bank and finally the national library (today: Þjóðmenningarhúsið cultural center ).

In 1950, on the occasion of the founding of the Republic of Iceland in 1944 , the museum was given its current building in Suðurgata 41. The main building shows the permanent exhibition and special exhibitions on the two upper floors, while service facilities, a museum shop and cafeteria are located on the ground floor. The administration is located in its own building, a few meters east of the main building.

The permanent exhibition presents - in chronological order - in multimedia form the cultural history of Iceland from the time of the conquest to the present day under the title “A nation is emerging. 1200 years of culture and society in Iceland ” . The older historical epochs are mainly presented on the basis of archaeological finds, the newer epochs are more folkloric . The first section of the exhibition represents a ship as it took advantage of the first settlers, the last is on a historical baggage handling system of the Keflavik airport presents, connects as the gate, the Iceland with the world.

The museum's legal mandate is to preserve Iceland's nationally significant historical evidence. This includes both movable objects and real estate . 43 historic buildings across Iceland are also part of the National Museum. This includes all important peat houses and all peat churches that have been authentically preserved, various wooden churches and a number of non-church buildings.

The museum also has the task of researching and conveying Iceland's historical heritage. Guided tours and educational activities are offered.