The logo of the Israel Academy of Sciences

Entrance to the Israel Academy of Sciences 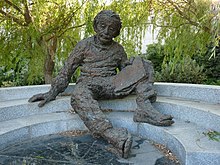 Statue of Albert Einstein in the courtyard of the academy

Just six years after Israel was founded, the Minister of Education, Professor Ben-Zion Dinur, and a committee of prominent scientists suggested the establishment of an independent national academy. After this request had been formally supported by Prime Minister David Ben-Gurion since 1957 , after preparations by the religious philosopher Martin Buber the academy was founded on December 27, 1959, which was confirmed by the Knesset in June 1961 . Martin Buber became its first president.

The Israel Academy of Sciences has two sections: Natural Sciences and Humanities (also includes social sciences ). It is administered by the President and Vice-President, the Chair of the Sections and a Managing Director. There is an annual plenary meeting and the sections meet three times a year. The headquarters of the Academy is Jerusalem , Albert Einstein Square, 43 Jabotinsky St.

In addition to organizing the best scholars and scientists living in Israel, the aims of the academy are to promote science and research projects, advise the government in matters of research and science planning of national importance, maintain contacts with relevant foreign institutions and represent Israel at international organizations and conferences. The Academy also participates in the financing of national and international research projects (e.g. CERN ) and awards grants .

According to the statutes, each of the two sections (natural sciences and humanities) can have up to 35 members, whereby members who are older than 75 years or do not (no longer) live in Israel are not counted. As long as the number of 35 is not reached, up to five new members can be elected per section and year. This is a lifetime membership.

The Israeli Academy of Sciences has been headed by the following presidents: