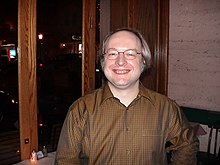 Jakob Nielsen (born October 5, 1957 in Copenhagen , Denmark ) is a Danish writer, speaker and consultant in the field of software and web design usability . He earned a doctoral degree ( Ph.D. ) in the design of user interfaces and computer science at Technical University of Denmark . Nielsen worked at Bellcore , IBM and as a "Senior Researcher" at Sun Microsystems . As early as 1991, Nielsen predicted that hypertext was the future of user interface design and wrote a comprehensive book on the subject. He updated the book in 1995, taking into account the success of the web.

After his regular articles about usability on his website attracted a lot of media attention, he and Donald Norman founded the Nielsen Norman Group , a usability consultancy.

Today, Nielsen is often cited as one of the leading figures in the field of usability. He is known for his (often severe) criticism of popular websites. For example, he complains when users are hindered by playful details such as animations, Flash and graphics. Nielsen continues to publish a bi-weekly newsletter , has published several books on web design , and holds 79 US patents .

In 2006, Nielsen set up the 90-9-1 rule (also: one percent rule ) for using online communities : 90% of users only read and watch, 9% of users participate from time to time, and only 1% of users actively contribute content; most of the contributions come from them.

From 1994 to 1998 he was a Distinguished Engineer at Sun Microsystems . He was hired to make high-performance enterprise software more user-friendly, as most of his projects at the telephone company and IBM had focused on large-scale applications. Fortunately, however, a Distinguished Engineer job definition is, "You are supposed to be the world's leading expert in your field, so you have to figure out what is most important to the company, what you can work on." Therefore, Dr. Nielsen ended up working most of the time at Sun, defining the emerging area of ​​web usability. He was the usability lead for several rounds of design for Sun's website and intranet (SunWeb), including the original SunWeb design in 1994.

Nielsen is a member of the editorial board of the book series Interactive Technologies by Morgan Kaufmann Verlag.

Nielsen founded the "Discount Usability Engineering" movement for quick and cheap improvements to user interfaces and invented several methods of usability , including heuristic evaluation . He holds 79 patents in the United States primarily aimed at making the web more user-friendly.

Nielsen gave the Nielsen Act its name, stating that network connection speeds for high-end home users would increase 50% per year or double every 21 months. As a corollary, he found that since this growth rate is slower than that predicted by Moore's Law of Processor Performance, the user experience would remain bandwidth-limited.

Nielsen has also defined the five quality components of its "Usability Goals", which are as follows:

Nielsen has been criticized by some graphic designers for failing to balance the importance of other aspects of the user experience such as typography , readability, visual cues of hierarchy and importance, and eye appeal.

Nielsen has been quoted in the computer and mainstream press for criticizing the Windows 8 user interface. Tom Hobbs, creative director of the Teague design firm, criticized some of Nielsen's points on the matter, and Nielsen responded with some clarifications. The subsequent brief and turbulent history of Windows 8, which was published on October 26, 2012, seems to have confirmed Nielsen's criticism: Sales of Windows-based systems fell sharply after the introduction of Windows 8; Microsoft released a new version, Windows 8.1, on October 18, 2013 to address the numerous issues that were encountered in Windows 8, and later, in July 2015, Windows 10 , a complete makeover.

Nielsen's 2012 guideline that websites for mobile devices must be designed separately from their desktop-facing counterparts has come under fire from both Webmonkey's Scott Gilbertson and Josh Clark, who writes for .net magazine, and Bruce Lawson of Opera, who writes for Smashing Magazine , and other technologists and web designers who advocate responsive web design. In an interview with .net magazine, Nielsen stated that he wrote his guidelines from a user-friendliness perspective, not an implementation perspective . However, Nielsen seems to have ignored emerging software technology related to responsive web design, where a single body of code, while requiring more careful implementation, can run on devices of various screen sizes, from mobile screens to desktop monitors.

In 2010, Nielsen was listed among 28 "World's Most Influential Designers" by Bloomberg Businessweek .

In recognition of Nielsen's contributions to usability studies, SIGCHI presented him with the Lifetime Practice Award in 2013.