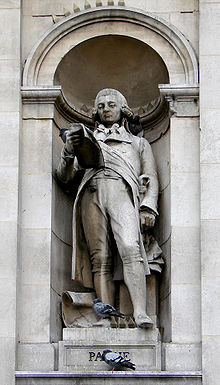 Statue Paches on the facade of the Paris City Hall

The son of a domestic servant of Swiss origin worked as a private tutor, then was the first secretary of the naval minister and royal official before he moved to Switzerland with his family. He returned to Paris in 1789, where he joined the cabinet of the Interior Minister Roland and in October 1792 was appointed Minister of War on the Provisional Executive Council.

Jean-Nicolas Pache moved from Gironde to Montagne , removed moderate staff from the War Ministry and replaced them with radical Jacobins such as François-Nicolas Vincent and Ronsin . The politician, overwhelmed with his tasks, then tried to organize a procurement directorate, which should counteract speculation and minimize the influence of army suppliers. However, the National Convention dissolved the Procurement Board in January 1793 at the urging of General Dumouriez . The Girondin deputies achieved the impeachment of Pache on February 4, 1793.

A few days later, Pache won the election as mayor of Paris. He had all public buildings adorned with the motto “Liberté, Egalité, Fraternité” and on April 15, 1793, he led a delegation of the Paris Sections, which called on the National Convention to exclude twenty-two Girondas from its ranks. Pache advocated the uprising of the Parisian sans-culottes from 4th / 5th September 1793 and supported their demands. In the spring of 1794 he got caught up in the clashes between the supporters of Héberts and Robespierre and was therefore deposed and arrested as mayor of Paris on May 10, 1794.

After his release as a result of the general amnesty of October 26, 1795, Pache worked as a representative of the directorate for public hospitals. He supported the coup d'état of the 18th Fructidor V (September 4, 1797), left Paris at the end of 1799 and retired to his property in Thin-le-Moutier in the Ardennes department, where he grew flowers and stayed away from politics.

Jean-Nicolas Pache was respected as a good family man, was a close friend of the mathematician Gaspard Monge since 1774 and remained connected to Rousseau's ideas throughout his life .