The Jesuit community in Aachen was the Jesuit branch in Aachen , which existed from 1601 to 2012 with a few interruptions and at different locations. The order has shaped life in the city in a lasting way: the former monastery church and today's church Archangel Michael – St. Dimitrios was its liturgical center and the Jesuit school founded by the order developed into today's Kaiser-Karls-Gymnasium . 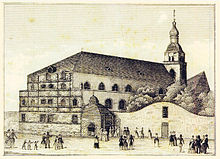 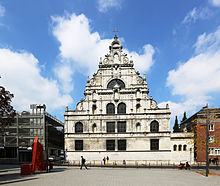 After the late 16th century at the height of the Aachener religious riots of Protestantism had won in the city more and more influence and reformed citizens were drawn into the city parliament, drove Emperor Rudolf II. The Counter-Reformation in Aachen ahead and punish relevant political and economic officials with the imperial ban . These imperial measures were supported on the theological side by the Jesuit order, which was recruited in 1600 by resolution of the Aachen city council to found a local branch after two of their religious had previously worked briefly in the city between 1579 and 1581.

In the 1590s-years the Jesuits received from the German Order of St. Giles Coming whose inherited the offer Tertiarierkloster Aachen Webbegarden to acquire, but which they rejected because of weighing on the monastery debt burden. With significant support from the ruling mayor of the imperial city of Aachen , Wilhelm von Wylre , they finally received the property with the villa "Zum kleine Bock" of the outlawed mayor Bonifacius Colyn, which was confiscated by the city, between today's Jesuitstrasse and Annastrasse, at that time Gengstrasse and Scherpstrasse called. There the order first had a monastery built with an attached boys' school and a few years later a monastery church. As early as September 1601, this school was able to open as the "Gymnasium Marianum of the Jesuit Order", especially for educated children from high-class families, and due to the large number of people it was expanded in 1615 by another college building. The Jesuit Matthäus Schrick (1567–1646), a brother of Mayor Albrecht Schrick, was appointed the first rector of the school .

At the same time, in 1607, the order received approval to set up its first own chapel on the ground floor of a private house in Scherpstrasse, after the masses had to be read in the Karlskapelle of Aachen Cathedral beforehand. This new chapel was consecrated in 1608 by the Liège auxiliary bishop Andreas Stregnart to the Archangel Michael . After the Jesuit community received more and more fines from the Protestants expelled by imperial ban, it was able to plan and build a new church in 1617, the cornerstone of which was laid one year later by Mayor Albrecht Schrick and in 1628 by the papal nuncio Pier Luigi Carafa inaugurated.

The monastery building itself was laid out in a U-shape around a spacious inner courtyard, in which the monastery garden was adorned with a fountain. The west wing of the monastery ran in the direction of Scherpstrasse, where a wall with a large entrance gate closed off the forecourt. During the great city ​​fire in 1656, the monastery buildings and the monastery church were badly affected, with the school building alone remaining relatively undamaged. First, the monastery church was restored and a tower was added between 1658 and 1668, and the monastery was completely rebuilt between 1663 and 1693. In addition, the school program was expanded in 1686 through the approval as a "branch office" of the University of Trier to acquire a lower degree in philosophy , which could previously be completed at the Dominican monastery in Aachen , and from 1717 by the introduction of a theology course. In this way the order secured the training of priests and also created a channel for social advancement. The branch was subordinate to the Lower Rhine Province of the Jesuits with the management in Cologne.

With their comprehensive pastoral care and their Christian-humanistic pedagogy, the Jesuits played a decisive role in the church reforms in the 17th and 18th centuries as well as in the restoration and stabilization of the Catholic faith in the imperial city of Aachen.

Nevertheless, in 1773 Pope Clement XIV ordered the general abolition of the Jesuit order , whereupon the Jesuit community in Aachen had to be dissolved. The monastery buildings were closed, the city of Aachen continued to run the Jesuit high school as the “Gymnasium Marianum of the Free Imperial City of Aachen” in the rooms of the Augustinian monastery, which was also secularized . The vacant church was first used by the invading French from 1794 as a grain store and reopened as a parish church from 1804. Today the Jesuitenstrasse named after the order commemorates its first settlement in Aachen.

After the Jesuit order was re-admitted in 1814, it was not until 1851, at the instigation of the Aachen pastor Leonhard Aloys Joseph Nellessen, that the Jesuits were able to come back to Aachen to set up a branch for the second time. In addition, Pastor Nellessen gave them both a house from his property on Bergdriesch and a considerable part of his considerable private fortune as a "start-up" aid. In February 1856 they founded the "Aachen Congregation" as a local section of the Marian Congregation for Men , which was also founded by the Jesuits in 1563 in Rome , the aim of which was to lead a life united with faith based on the model and the principles of "seeking and finding God" of the Jesuit founder Ignatius of Loyola .

After the new Marienkirche in Aureliusstraße near Aachen main station was completed in 1863 , the Jesuits took over pastoral care there. In order to be more present in this station district, the order had a new monastery building erected a few hundred meters away. Only a few years later the Jesuit community was forbidden by the Jesuit Law of July 4, 1872, enacted as part of the Kulturkampf , so that the Jesuits were again expelled from Aachen. Their monastery, which they only moved into a few years ago, became meaningless before it was taken over by the Order of the Christian Sisters from the Capuchin Trench in 1899 .

A few months before the end of the First World War, at the end of 1917 and with the lifting of the Jesuit ban, some Jesuit fathers dared to return to Aachen, where they initially dealt with the pastoral care of the young student men. In 1919 they bought a house in Kurbrunnenstrasse from the Erckens family of cloth manufacturers in Burtscheid , where they set up their third community, which was founded by the superior and later cardinal Augustin Bea SJ and which ran until 1921. Since 1914 he had been looking after the confreres in Aachen who had been drafted into military service for the German Reich .

In the following years, the focus of her work was on the local expansion and organization of the Federal New Germany , an "Association of Catholic Students in Higher Education" founded by the Jesuits in Cologne in 1919, which promoted a new, better and more Christian Germany that was strongly influenced by Medieval knighthood should orientate wanted to implement. At the same time, the Aachen Jesuit branch increased its cooperation with the "Aachen Congregation". In 1928 the Aachen branch hosted the so-called Aachen Conference , at which the vehement critic of Freemasonry , Father Hermann Gruber from the Ignatius College in Valkenburg aan de Geul , met with the Freemason Kurt Reichl , the Sovereign Grand Commander of the AASR Eugen Lennhoff and met the grand historian of the Grand Lodge of New York Ossian Lang for an unofficial exchange of ideas.

The third Jesuit community in Aachen did not last long either, as their branch was closed by the National Socialists in 1941 during the Second World War and their house was confiscated in 1941 and became the property of the City of Aachen. A few months before the end of the war, it was completely burned out by bombing. The Fathers stayed in private quarters and helped out in various local parishes during the war and beyond. 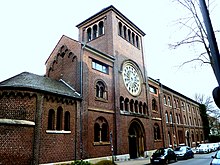 It was not until 1962 that enough Fathers came together who were ready to found another community. Since there was a lack of money and enough members, they decided not to set up their own monastery building. Instead, they lived and resided as “city nomads” at changing addresses, initially until 1972 in a house on Kleinmarschierstrasse. They then moved into a house on Eupener Strasse until 1986, before they were allowed to move into the Redemptorist Monastery of Aachen with the attached Church of St. Alfons, which had been given up by the Redemptorists and taken over by the Diocese of Aachen . They resided there until 2005 and then moved into a house in Burtscheider Jägerstrasse, where they set up their new branch office. After the membership of the Aachen community had shrunk to four fathers, the Provincial of the German Province of the Jesuits, Father Stefan Kiechle SJ, ordered the final dissolution of the Aachen Jesuit community at the end of 2012.

During their fourth period of settlement in Aachen, the Jesuits were now involved, among other things, in school pastoral care and in the Association of Catholic Student Youth and, until 2003, in the youth work for international cooperation based in the "Friedrich-Spee-Haus" and operated a factory in the Bleiberger factory. and education center for young people and adults. In addition, they continued to work in adult education, especially in the local Kolping Society, but also in the Karlsschützengilde and directed the men's organization in the Aachen diocese. They did pastoral work during their time in the former Redemptorist monastery at the Church of St. Alfons and then until their dissolution in the parish of St. Peter . In addition, they worked in the pastoral care of the University Hospital in Aachen until the end .

In addition, the Aachen Jesuits were involved in the Misereor Episcopal Relief Organization and at the Mission Research Institute of the International Catholic Missions organization missio eV based in Aachen, where they twice made executive directors with Ludwig Wiedenmann SJ from 1979 to 1988 and Ludwig Bertsch SJ from 1989 to 1996 and which houses their mission library.

The deceased Jesuit Fathers found their final resting place in a larger burial ground in Aachen's East Cemetery since 1851 .