East cemetery entrance area with mausoleum and St. Joseph's Church of the Holy Sepulcher in the background

The Aachen East Cemetery is the oldest cemetery in the modern history of the city of Aachen , which was established in 1803 at the instigation of the French municipal government . It is located in the east of the urban area and geographically belongs to the north quarter . The Ostfriedhof was on December 6, 1988 as one of the oldest examples of modern cemeteries under monument protection provided.

After the deceased of the Roman Aquae Granni had already been buried outside the city limits at that time on a wasteland on which the Aachener Peterskirche was built later in the 12th century , it was customary from the early Middle Ages to first place the dead in the Münsterkirchhof in the immediate vicinity of the Aachen Minster , and thus to be buried within the city limits. Later, and as the number of inhabitants increased, the Catholic citizens were buried near their respective places of worship or within the churches in specially designed funerary cellars. On the other hand, since 1605, the Protestant citizens were buried outside on the edge of the outer city ​​wall of Aachen in the hallway labeled Am Güldenplan a few 100 m in front of the Kölntor , which was later no longer occupied from 1899 and has been part of the city ​​garden of Aachen since 1945 .

It was only after the French invaded the area during the First Coalition War and the ensuing occupation of the left bank of the Rhine and the transfer of municipalities to the Arrondissement d'Aix-la-Chapelle from 1794 that the gradual change to a more modern burial culture was initiated. For health reasons, the occupying forces forbade the use of cemeteries within the city. Even before the official imperial decree of 1805, it was decided two years earlier in Aachen to open up a new cemetery area about 700 m east of the Adalbertstore in the east of the city for the Catholic population.

The Aachen Ostfriedhof was finally opened on August 18, 1803 and placed under the administration of the Alexians from the Alexian Monastery in Aachen , who took care of them for many decades until the commercial funeral home was founded. It is located east of the gate on the northern side of Adalbertsteinweg, an arterial road towards Kornelimünster , which was also built during the Napoleonic era . Since about this time, the name Tolbetsleäm , which is made up of the words Tolbet and Leäm , has also become popular. Tolbet means in the Aachen dialect, the Öcher Platt , a form of the Ripuarian language group , Adalbert and refers to the St. Adalbert Church built near the Adalbertstor . Leäm is the dialect word for clay and relates to the soil conditions in the cemetery area. At that time, bricks were burned from the clay of the Adalbertsteinweg. 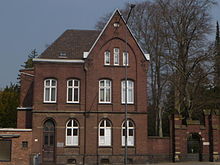 Service building of the Ostfriedhof (based on plans by Joseph Laurent)

In the years 1883, 1889 and 1933 the east cemetery was significantly expanded, but initially remained under the jurisdiction of the parishes of St. Adalbert, St. Peter and St. Foillan . The deceased citizens of the remaining Aachen parishes were then buried from 1889/1890 on the newly built Aachen Westfriedhof . In addition, in 1898 the new Catholic St. Joseph's Church was completed and consecrated directly at the East Cemetery . During the same period, the cemetery also received a new service building for the cemetery inspector in the neo-Gothic style and adapted to the shapes of St. Josef based on designs by the Aachen city architect Joseph Laurent . From 1937, the denominational ties were finally lifted. Since the turn of the century, the increased interest in acquiring family graves led to an increased conversion of row graves into private graves. Several mostly local artists, stonemasons and sculptors, such as Carl Esser , Wilhelm Pohl and Gustav Angelo Venth , created an impressive design for these tombs with their individually made sculptures.

Most of the cemetery was listed as a historical monument in 1988. Due to the loamy soil conditions, only urns have been buried since January 25, 1989 . Since the east cemetery can no longer be expanded, the nearby Josefskirche was converted into a church of the Holy Sepulcher as an alternative as part of a larger campaign of church rededications due to the decreasing number of members in the diocese of Aachen and has served as a columbarium for urn burials since 2006 .

Since 2004, a non-profit association has been looking after the preservation of the Ostfriedhof in general and the safeguarding and preservation of old historical graves in particular. There are also numerous information events and guided tours for the population as well as individual projects with various school classes, among others. 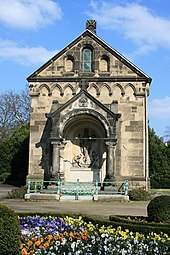 Front view of the cemetery chapel with mausoleum

The cemetery chapel of Ostfriedhofs is a copy of the 1895 aborted Chapel of Quirinus of Neuss on the Good Melaten just outside the city, a former Aachen infirmary . Spolia from the old chapel was used for the new production in the east cemetery . Today the front part of the chapel serves as a mausoleum .

Burial place of the former mayor of Aachen Johann Contzen 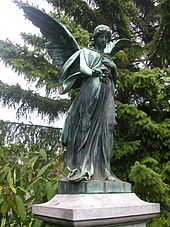 Depiction of angels in electroplating on the Schöbel-Nadenau tomb

The last resting places of numerous important Aachen personalities from the last 200 years can be found in Aachen's Ostfriedhof. Among other things:

Grave stele of the Alexians Aachen

Grave field of the poor sisters of St. Francis (field 5)

as well as the grave fields of