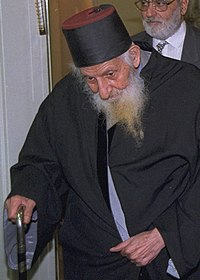 Born in the Ottoman Empire as the son of the spice trader Ze'ev Diba. The birthday was a Saturday in the month of Tishri , in the days between Sukkot , known as Chol HaMo'ed.

From an early age, Kaduri attached great importance to the Torah . He was a student of Ben Ish Chai ( Rabbi Yosef Chaim of Baghdad ) and studied at the Zilka Yeshiva in Baghdad.

Emigrated to the British Protectorate of Palestine in 1922 , he changed his name. He joined the British Army and worked as a translator. After his military service he went to Shoshanim Ledavid Yeshiva for Kabbalists in Iraq , later he studied at the Porat Yosef Yeshiva in the old city of Jerusalem with Saliman Elijahu, father of Mordechai Elijahu . After the Jewish quarter fell into the hands of the Jordanian army during the Palestine War in 1948 , he moved to the Bukharim quarter. There he continued his studies and worked as a bookbinder, which he had already learned in Baghdad. Rabbi Kaduri was known for his photographic memory and knowledge of the Talmud , Rashi, and Tosafot . However, he did not publish any books himself. Although he wrote about Kabbalah , he published his writings only for private purposes.

Its popularity began to grow in the 1960s, following the death of Rabbi Ephraim Cohen, a leader of the Porat Yosef Yeshiva . Over the years, thousands of people visited him to ask for advice, to ask for healing or to have amulets consecrated. He taught the secrets of the Kabbalah amulets from Yehuda Patia. His followers also spoke of miracles.

In the last years of his life he was approached several times for political purposes. In 1996 Rabbi Kaduri took part in events of the Shas party , for which he also consecrated amulets.

At least 200,000 people attended his funeral the following day.

Before his death, Kabi announced to Kadouri that he expected that he had met the Jewish Messiah a year ago and that he would appear soon. He is said to have left a handwritten note to be opened a year after his death. A scanned handwritten note was posted on his website for a short time. It said: "ירים העם ויוכיח שדברו ותורתו עומדים".