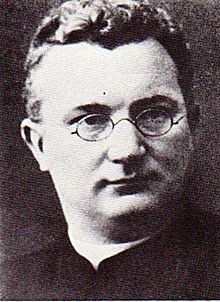 The Konvikt founded by Spieker

Johannes Spieker (born May 10, 1860 in Brakel , † January 23, 1914 in Werl ) was a German Roman Catholic priest and high school professor . He was the first director of the Marien-Gymnasium Werl as well as the founder and founder of the boys' convict there .

Spieker attended the Rector's School in Brakel and then until 1880 the Theodorianum in Paderborn, where he passed the school leaving examination. In Münster he studied Catholic theology and then entered the Eichstätt seminary . There he was ordained a priest on March 30, 1884 . He was entrusted by the Archbishop of Paderborn with the management of the private rectorate school in Gelsenkirchen and remained in this position until 1904. In 1903 he passed the state examination for the higher teaching post in Münster. The private rectorate school was taken over by the city of Gelsenkirchen and converted into a secondary school; Spieker had been promised that he would be its head. However, the city chose a different candidate. Thereupon he took leave of absence because of cardiac dilation and severe nervousness and submitted an application for adoption, which was granted in November 1905.

He was elected on July 27, 1906 by the city of Werl to head of the institution (Marien-Gymnasium) and confirmed in August. In another election in 1908 he was elected headmaster, and on July 14, 1908, he was awarded the title of professor by the state. In order to have enough students for the grammar school, he planned to build a Konviktes.

In order to enable the construction of the Konviktes, he made 100,000 Reichsmarks available from his property . In his opinion, it was necessary to build accommodation for potential students in order to fully utilize a full high school with students from the surrounding area.