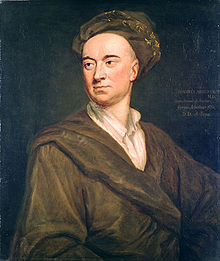 After studying medicine and mathematics at Marischal College in Aberdeen and a degree in medicine from St Andrews University , Arbuthnot taught mathematics in London and became a Fellow of the Royal Society in 1704 . He was mainly concerned with probability theory and was a friend of David Gregory . Between 1705 and 1714 he was the personal physician of the British Queen Anna .

In 1710 he published an alleged proof of God under the title An argument for Divine Providence, taken from the constant regularity observed in the births of both sexes . Arbuthnot noticed that in all of the 82 birth statistics he analyzed, more boys than girls were born. He interpreted this as evidence of a coincidence that did not exist in this regard. From today's perspective, one would conclude with such data in the course of a statistical hypothesis test that the probability of the birth of a boy is significantly higher than that of a girl. In this respect, Arbuthnot is also considered a pioneer in statistical tests.

Arbuthnot was one of the founders of the Scriblerus Club in 1713 , which included writers and poets such as Jonathan Swift , Alexander Pope and John Gay . The resulting fictional memoirs of Martinus Scriblerus were in turn caricatured in the satire The Scribleriad ( 1751 ) by Richard Owen Cambridge . He achieved lasting fame for his political satires , which were directed against the Whigs' party and participation in the War of the Spanish Succession . His Miscellaneous Works were published posthumously in 1751 .