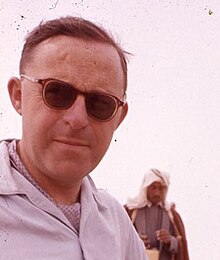 Allegro's life's work was the scrolls of Qumran and the conclusions drawn from them. His reputation as a scientist and as a person was determined by the negative and disparaging reaction to his thesis that Christianity was based on a psychedelic cult that made use of hallucinogenic mushrooms . With this thesis he had a great influence on the youth and cultural scene in the 1960s. The duo Witthüser & Westrupp designed their 3rd program entirely under the influence of Allegro's theses.

Allegro died on his birthday at the age of 65. The cause of death was not known.

The name John Marco Allegro is inextricably linked with the evaluation of the writings from Qumran. As a young scientist who had studied Semitic languages at the University of Manchester and Hebrew dialects at Oxford , he was appointed in 1953 as one of nine members of the international team of scientists to evaluate the Dead Sea writings . Allegro was part of this team on the recommendation of his teacher Godfrey R. Driver. His profound knowledge but also his mental attitude as a Protestant-influenced agnostic made him stand out for the project. The team also included Frank Moore Cross, Patrick Skehan (both USA), John Strugnell , Dominique Barthélemy (both Great Britain), Claus-Hunno Hunzinger (Germany) and Josef T. Milik (Poland). Allegro was thus the only non-Christian scientist to evaluate the scrolls, and he saw it as a special responsibility which led him to, contrary to the efforts of the project leader Roland de Vaux , let a broad public share in the knowledge gained. In 1956 he published his first book, The Dead Sea Scrolls . In this book he advocates the thesis that the copper scroll of the scriptures he opened contains an inventory of the treasure of the religious community of Qumran. In 1959 he finally made the unsuccessful attempt to prove this thesis through on-site research on his own initiative . A year later, he published The Treasure of the Copper Scroll on the subject . He used unauthorized image material for this. In a book review in 1961, Allegro was accused of inaccuracy and misrepresentation by his team leader de Vaux. Further work was determined by this dispute and further controversies. Allegro's position, which deviated from the views of his colleagues, gained attention due to the growing public criticism of the inadequate information about the finds from the Dead Sea.

John Marco Allegro's public reputation was determined by his public controversies with his peers. But regardless of this, he played a decisive role in the deciphering of the partially encoded scrolls, especially those from cave four. Between 1955 and 1962 he took over 1,500 photos of fragments of the scrolls, which are extremely important sources for future generations.