The title of this article is ambiguous. For the administrative unit in Venezuela, see José Tadeo Monagas (district) . 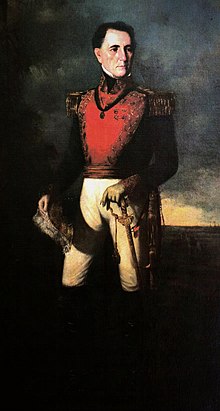 José Tadeo Monagas was born as Judas Tadeo Monagas Burgos on October 28, 1784 in Amana de Tamarindo, a small village around ten kilometers south-southeast of Maturín. The historian Ramón Azpurúa noted in his Biografias de hombres notables de Hispano-América (1877) that Monagas commonly used his name “J. Tadeo Monagas ”wrote. This gave the public the impression that his name was "José Tadeo", who has reproduced himself unchecked in historiography. His mother's name was Perfecta Burgos Villasana. His father, Francisco José Monagas Fernández († 1814), was a large landowner and rancher and began at an early age to raise his son to be a skilled farmer and landowner.

Beginning of the military career

From the beginning, since July 1810, the Monagas were on the side of the republic, but it is not clear in what role. After Francisco de Miranda surrendered the First Republic on July 25, 1812 in San Mateo (cf. Wars of Independence in Venezuela ), Monagas fled to unpopulated regions. Whether and to what extent he had previously enjoyed military training cannot be proven. He went south to the Orinoco and organized a guerrilla war with other mounted patriots against the Spanish colonial troops. His first battle is reported at Bocas del Pao (80 kilometers west of today's Ciudad Bolívar in the Venezuelan state of Anzoátegui) in early 1813. The meeting must have taken place by mid-February at the latest. After the battle, he joined Manuel Villapol, who had already successfully fought the Spaniards during the First Republic and had stayed in the region. At the beginning of January, the patriots who fled to Trinidad had signed the Chacachacare protocol for the liberation of Venezuela and landed in the far northeast, on the Güiria peninsula. Santiago Mariño , the commander in chief, dispatched a detachment to Maturin, which took the city on February 2nd. Villapol and Monagas joined Mariño's troops led by Manuel Piar. When Monagas and his riders joined him, he received the rank of alférez (flag-bearing company lieutenant) and took part in the subsequent defense of Maturin on 19/20. March as commander of a squadron.

He was involved in the mentioned battles for Maturín against the governor-designate of the colonial province Lorenzo Fernández de la Hoz, and against the Spanish commander-in-chief in Venezuela Domingo de Monteverde (May 25, 1813). On October 2nd, together with José María Freites and his brother José Gregorio, who was eleven years his junior, he successfully opposed a first campaign by José Tomás Boves' Llaneros . With Vicente Campo Elías he had less luck against the same opponent in the first battle of La Puerta (a ravine a little north of Calabozo ) and escaped the annihilation of the republican troops on February 3, 1814 only with luck and death. With the victory of Mariños of Bocachica on March 31, in which he was involved, he appalled the San Mateo defending Simón Bolívar . He was also in the Eastern Army when it failed in Arao in a counter-campaign against the Spanish forces under José Ceballos and, together with Bolívar's troops, defeated Ceballos in the first battle of Carabobo on May 28th. Because of his achievements during this time, he was promoted to colonel.

After the defeat in the second battle of La Puerta, Monagas returned to his homeland with the bulk of the eastern army, where he spent the second half of 1814. Presumably under the orders of José Francisco Bermúdez (who could not agree on tactics with Bolívar), he took part in the bloody defeat in the delayed battle of Aragua de Barcelona (80 kilometers south of today's capital of the state of Anzoátegui ). He was in Maturín in October 1814, and when José Tomás Boves and Tomás José Morales annihilated the Republicans in Urica and Maturín in December 1814, he was also on the battlefields.

Tirelessly for the republic

At the beginning of 1815 he was back in the south of what is now the state of Anzoátegui, where he and some indestructible men had built a troop that tried in vain to make their way to the coast during the first half of the year. In June he joined the guerrillas of Manuel Cedeño in order to attack Angostura ( Ciudad Bolívar ) unsuccessfully in the middle of the year . At the end of the year, Pedro Zaraza also joined the troops he had recruited.

The failed landing operation of Bolívar from Ocumare de la Costa, on the central Venezuelan coast in mid-1816, led the group around Monagas, who broke through eastwards under Gregor MacGregor and Carlos Soublette, to 600 soldiers of this expedition. With these reinforcements and Monagas as commander in chief, the patriots began the attack on Barcelona . The capture of the port in mid-September gave Bolívar the opportunity at the end of the year to land safely with a second expedition. He was then involved in breaking up the Spanish forces in the region (El Juncal, September 27). Although he was present at the Cariaco Congress in May 1817, at which Mariño proclaimed a republic and was elected commander-in-chief, he then joined Bolívar. With Bolívar, Monagas operated first on the coast and in the second half of the year on the Orinoco when taking Angostura and Ciudad Guayana.

In the meantime he has advanced to brigadier general and was with Bolívar when he attacked the Spaniards in 1818 as part of his “center campaign” in central Venezuela. After their failure, Monagas returned to the east, took part in the diversion for Bolívar's New Granada campaign in 1819 (see The Battle of Boyacá ) and managed to do it with some before the armistice of Santa Ana (near Trujillo ) came into force in 1820 Fighting to finally liberate his home region south of Barcelona (which, after its loss in 1817, was recaptured by Rafael Urdaneta with the support of Johann von Uslar ). During Bolívar's Carabobo campaign in 1821 (see The Battle of Carabobo ), he secured the east of the country and Bolívar made him division general.

While fighting with the Spaniards continued in the west, in 1822 he took over the post of governor of Barcelona and was in command of the eastern Orinoco region. After the Spaniards were finally defeated in the west of Venezuela, he married Luisa Oriach Ladrón de Guevara in 1823 and retired to his hacienda.

When in 1830 the movement led by Paez to separate Venezuela from Greater Colombia , coupled with anti-Bolivarian tendencies, led to political instability in the country, he committed himself to Bolívar and the state he had created. This brought him into opposition to Paez and his followers, but he could not prevent the breakup of Greater Colombia. Monagas was a federalist and as a liberal did not always agree with Bolívar's conservative policies, but with the radical break made by Paez, he saw his work of liberation in danger. He therefore took part in the “pacification of the east” in favor of a secession and a re-establishment of Greater Colombia. In May 1831, a federal republic consisting of the eastern provinces of Venezuela under Santiago Mariño, with Monagas as deputy, was proclaimed in Barcelona. In June, Paez managed to convince his former comrades of national unity and to lay down arms by means of clever negotiations. Monagas and his friends were amnestied for it, and Monagas withdrew again into private life.

In 1846 Monagas ran for the Conservatives as a presidential candidate with the support of party chairman Paez and incumbent President Carlos Soublette. He prevailed against his fellow candidate Bartolomé Salom within the party because Paez believed that his influence on Monagas was greater than that on Salom. Monagas won the election against his liberal opponent Antonio Leocadio Guzmán (the father of Venezuelan President Antonio Guzmán Blanco ). Confirmed by Congress at the end of January 1847, Monagas took office on March 1.

Monagas' liberal stance, which was reflected in his decisions as president, led to a falling out with the party for which he had been formed. He pardoned his liberal opponent, who was still indicted under Soublette and sentenced to death. Monagas exchanged conservative for liberal ministers, whereupon the mood in parliament turned against him. The situation came to a head when MPs tried to hold the President accountable. An angry crowd stormed Congress on January 24, 1848 in favor of Monagas. The attack on the Congress ( El Asalto al Congreso ), in which some MPs were killed, prevented the conviction of Monagas and also strengthened the power of later presidents over parliament. He was succeeded in 1851 by his brother José Gregorio.

Immediately after his brother, whom he had steered in his favor, Monagas was re-elected president. However, his popularity was waning because he tried to establish a family dynasty in the presidential chair, and apparently also because he abused his office for self-enrichment on a large scale. A year before the regular end of his term in office, in 1858, he faced an uprising against him, resigned his office and fled to the French embassy. Then he went into exile for 6 years.

After his return in 1864, he began to gather dissatisfied people with whom he carried out an armed uprising against the government in 1868, the so-called "Blue Revolution". As an experienced military man, he won the fighting and entered Caracas as the victor in June 1868. Although the now 83-year-old no longer had the constitution to become president again, he was re-elected, but died in November before the elections took place. Commander-in-chief of the armed forces and provisional president was his son José Ruperto Monagas in early 1869 , but his attempt to restore Monagas rule failed due to resistance in the province, which is why he had to resign in April 1870.

Less than nine years after his death, José Tadeo Monagas' remains were transferred to the Pantéon Nacional in Caracas in May 1877 .