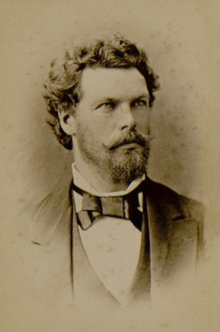 Freyn studied engineering at the Technical University in Vienna and at the German Technical University in Prague . From 1868 he was an engineer with the Austrian Northwest Railway . He was involved in the construction of railway lines in eastern Hungary and Transylvania and most recently headed the substructure office in Budapest. From 1874 to 1878 he directed the construction of the railway line from Pula to Rovigno and settled in Opochno (where his father had been a forester). In 1881 he opened an engineering office in Prague. He was vice-president of the Chamber of Engineers in Bohemia.

As a botanist, he was particularly concerned with the flora of Hungary and southern Istria , with the genera Ranunculus and Hieracium and, most recently, with the flora of the Orient ( Turkestan , Central Asia ). He continued the work of Pierre Edmond Boissier and published in the magazine "Bulletin de l'Herbier Boissier". Its official botanical author abbreviation is " Freyn ".

The mushroom genus Freynella Kuntze is named after Freyn .